Ole Miss pitcher Pomeranz picks up another All-American honor | Gulflive.com
Oh, another honor for Pomeranz? Really? Is anybody surprised? Congratulations, Pom. I'm sorry that neither a bullpen nor run support could establish itself well enough to get you to Omaha.

Meet the Texas Longhorns: The Biggest Coward Program in College Football | NCAAFB FanHouse
As I said yesterday, Texas is afraid of losing their rule of the roost. Tell 'em about it, Trav Trav (wow, that was really stupid):

How bad is Texas' schedule now even with a round-robin nine-game slate to come in 2012? It's likely the Longhorns will have one top 25 conference game a season, the annual Texas-Oklahoma tussle in October. Meaning Texas will try and back door its way into the BCS title game each season by avoiding challenges rather than competing with the best in college football.

Texas of this decade = USC of last decade. Let's hope they don't get Reggie Bush'd. Or, hell, hope it if you want. Whatever.

DeMareo Marr Protects His Whip From Meth-Addict | Some Memphis Website
Click this link and watch the video and know that, even if you're running away from a practically "bare-feeted", third-string, scholarship vampire of an Ole Miss cornerback, you're going to pay. At the very least, we can thank DeMareo Marr for entertainment value (football aside, naturally).

A charge to good Americans, after the jump. 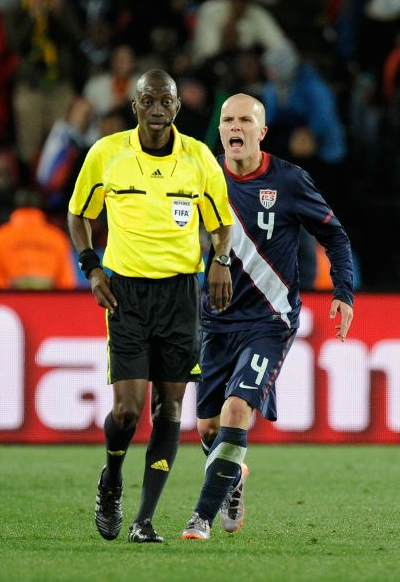 FIND HIM AND DESTROY HIM