"Well, they’d better really, really think about it before they cross those borders, and cross the Mississippi River, because it’s a totally different type of football, different brand of football, a different type of recruiting.  You gotta really be careful as to what you are getting into." -Tommy Tuberville on Conference Expansion

Although it doesn't look like it's going to happen anyway, Tubs had a fair warning for his now-fellow Lone Star Statesmen who were considering the possibility of joining our fair conference.

Read SSMUND's Fanpost
It more-or-less swayed me against the SEC's expansion. More on that later if I find time.

Utah Awaiting Invitation from Pac 10 | SBNation
We're not in the future predictin' bidness 'round here, but if we were I'd say this is the end of the conference movement. The Big XII is now the Big X and fine with it. The SEC, ACC, and Big East needn't change. The Big Ten is now the new Big Twelve (which shouldn't be confused with the Big XII which is now the Big X which isn't the Big Ten but rather the Big X which was the Big XII but not the Big Twelve which is... fuck... The lesson here kids: don't put numbers in your conference titles). And the Pac-10 is looking to become the Pac 12-with-four-schools-located-in-states-not-on-the-Pacific-Coast (The second lesson here kids: commit to your geographical conference nomenclature).

A lot of wacky shit could have happened, but this really does seem to be all that came and will come out of this round of conference affiliation musical chairs.

Untouchable SEC Rivalries | ESPN
The Egg Bowl is the third most untouchable rivalry in the conference, according to ESPN.com's Chris Low. Also according to low, Billy Cannon's touchdown punt return against the Rebels happened in 2005. 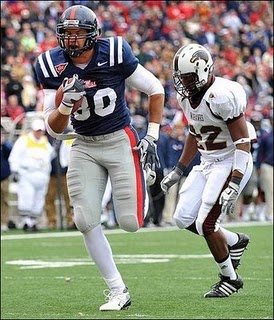