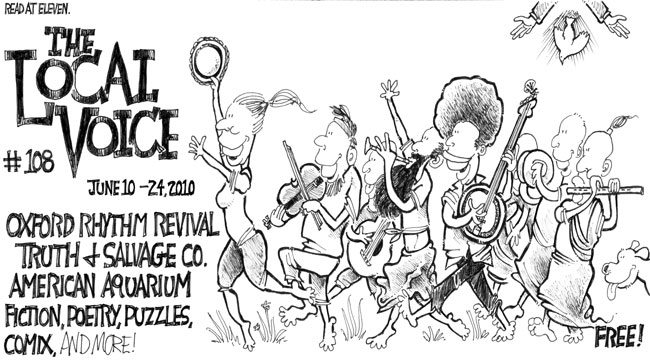 Oh yeah, BWE wrote one of these. It ran last Thursday and was only left unpublished on this fair blog due to my being generally braindead during this time of year. Let's consider this his end of the season wrapup type of thing, shall we? Article's after the jump.

As Trent Rothlin entered the game in the first inning of Sunday's elimination game against St. John's, every Rebel fan listening to the game hoped he could put out the fire started by the heavy-hitting Red Storm. The Rebel starter, David Goforth, had only lasted for two outs in the first inning, already having given up four runs.  To boot, more danger lurked as the bases were, at the time, fully loaded.  Hope remained as Rothlin had been solid out of the pen as of late, but whatever hope there was quickly dissipated as he could not stop the Red Storm's offensive fury. Four more runs scored before that inning ended. Eight runs in one inning. The first inning. That happened.  Seven of those eight belonged to Goforth, and Rothlin proceeded to give up three of his own over four further innings of work.  He had stopped the bleeding about as well as BP's "Top Kill."  Rory Mckean then entered and gave up four runs in one inning.  To round out St. John's batting practice, the normally shutdown closer Brett Huber entered and gave up six more runs.  The Rebels had no answer for the bats of St. John's, ending the final game of their season by giving a team most of you reading this have never even heard of 20 runs.

It seems that having no answer to adversity was the theme of the 2010 Ole Miss baseball season.

Early in the year, the Rebels dominated on Friday and Saturday behind the arms of Drew Pomeranz and Aaron Barrett.  For about a month, they were the most formidable one-two punch in the conference.  The problem lay with the team's effort and lack of quality pitching on Sundays.  Six straight Sunday losses kept sinking the team's opportunities to sweep and take a lead in the SEC's Western Division or the conference at large.

But, about halfway through the season, things began looking great. After the incredibly unlikely Sunday win at South Carolina and following consecutive sweeps of LSU and Mississippi State, the Rebels were in the driving seat.  They returned home from that series in Starkville only needing to win two of the last three remainin series to ensure a postseason hosting spot and great seeding in the SEC Baseball Tournament.  Instead, the Rebel bats cooled and the pitching--slumping in its own right--did not have an answer to the team's suddently inept offense.  The Rebs skidded to a 3-7 ending to the regular season.  In that span, they scored 2.9 runs per game while the defense gave up 7 runs per game.

After a 2-2 showing in the SEC tournament, the Rebels "earned" the two-seed spot in the Charlottesville regional and traveled to UVA for a revenge match-up from last year's Super Regional.  Pomeranz did his normal thing in the opening game and refused to allow the opponent to score--the same opponent, mind you, that scored the aforementioned 20 runs in game three of the regional.  But the once-stalwart-turned-liablity Aaron Barrett had a terrible outing in game two against Virginia.  When the Rebels finally found the bats they had apparently left in the dugouts of Dudy Noble and scored 16 against St. John's on Sunday, there were no pitchers who could record outs.  The 20 runs on 23 hits was the worse outing in seven years for Rebel pitching.

It was a fitting finish to a season that was filled with inconsistency.  All season long, our team or coaches would repair one weak point in our team, only to have something else go falter. A very obvious problem this season was that there was no good starting pitcher outside of Drew Pomeranz, and he will be a professional millionaire by the time this article is published.  And if the lack of a complete pitching rotation wasn't damaging enough, the bats went dead during the first season under the tutelage of Rebel alumnus hitting coach Matt Mossberg.  In fact, our batting average ranked 230th of 260 Division I teams.  That is a far cry from the number 13th ranking the 2005 nationally-seeded team had.  If more-reliable batters in Tim Ferguson and Matt Smith leave for the MLB draft, who will hit next season?  These rank among many questions fills the mind of the Rebel faithful and will more than likely cause Mike Bianco and company some sleepless nights over the next seven months.

Though we did not reach Omaha this season, it cannot be considered a complete disappointment. Many regarded it as a rebuilding year, and we still swept our biggest rivals in Mississippi State and LSU in the regular season.  Even though there were many question marks heading into the 2010 campaign, Bianco somehow got us another winning record in conference play.  Bianco's track record is good and, barring depletion by the draft, this recruiting class should help fill the void left by Pomeranz and others.

But is this not the refrain we hear every offseason? "Well the teams we went up against in the postseason were just better." "We weren't supposed to win many games this season." "We are bringing in a great recruiting class." I will be the first to admit that Ole Miss Rebel baseball success as of late is Mike Bianco. It is. No other Rebel baseball coach, save for the man for whom Swayze Field is named, is as accomplished as Mike Bianco. But, despite the excellent work he has done thus far, I think we fans have a legitimate gripe in his teams' postseason ineptitudes. Naturally, the man's job is not in jeopardy this offseason nor likely the next. But if our fans and administration begin to take an "Omaha or bust" approach with our Rebel baseball program soon, I won't blame them.

We now have the resources to make it to Omaha. It is just a matter of doing so.

Enjoy your Summers, Rebel baseball fans. We'll see you in 2011.