As, Texas A & M and the SEC flirt about our conference becoming "Home of the Thirteenth Man," we bring you some more absurdity:  Richie Contartesi catching the football... 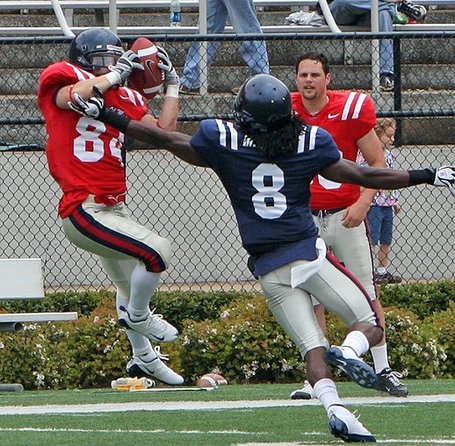 Oh, yeah, that's #84 getting hoppy up over Marshay in the 2008 Grove Bowl.  Think he'll frame this and show it to his kids when they accuse him of lying about playing college football?  That may be years away, but it's only 84 days until Day 1 of the Big XII Farewell Tour.  On with the roundup:

Huber Named Freshman All-American.  Brett joins a group that includes Stephen Head (yay!) and Cody Satterwhite (yay?) to be named to Louisville Slugger's All-Frosh team.  Between Huber and Jake Morgan, the Rebels can look forward to the losing margin being the same in the bottom of the seventh as it is at the end of the game.

Top Turkey Talk:  Tech will Tarry Longer in Current Trivial Troop.  VPI's Athletic Director likes their roost in the ACC very much, thank you.  Does this mean that Commissioner Slive's attention will begin to drift south toward the land that gave birth to NASCAR.  (<------ CULTURAL FIT AWARENESS ALERT!)

"It was never personal, Mikey.  Just business."  But, then again, maybe not.  CNBC examines from the "business perspective" from which everyone claims to be looking at this realignment, why it might not be such a good thing for the conference poachers, after all.

Cody Prewitt Commits.  The Rivals four-star athlete from Bay Springs looks like he will end up at safety.

Finally, if you're not checking Team Speed Kills at least twice a day, you're missing out on the best SEC-related expansion coverage anywhere.  Seriously, these guys have this beat on lock down.