Evan Button's Nightmare: A look back at the 2009 Super Regional

Share All sharing options for: Evan Button's Nightmare: A look back at the 2009 Super Regional

It is only fitting to look back at how we've fared in the postseason while thinking about the upcoming regional.  Only a year ago, we won the Oxford Regional to advance to the Oxford Super-Regional due to the kindness of UVA.  You see, they won the UC-Irvine Regional and gave us the opportunity to win a Super at home.  Only one obstacle (besides UVA and Bianco) stood between us and the CWS. 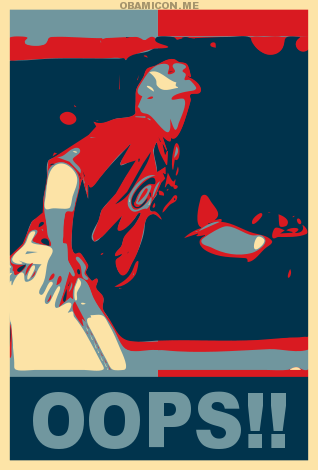 Evan, my sister could have made that throw.

Friday...The Rebels' offense did nothing for most of the beginning of the game.  Philip Irwin turned in another quality start.  Going into the eighth inning, we trailed 3-2.  In the ninth, Logan Power had a RBI to tie the game at 3.  Finally in the 12th, Matt Smith hit the first pitch he saw over left center to give us a 4-3 victory.

Saturday...We were one win away from Omaha.  Drew Pomeranz was on the mound battling, and he lacked some control due to a blister on his hand that developed while pitching too much the weekend before.  However, he lasted seven innings and only allowed two runs while striking out ten.  He left with a 3-2 lead.  David Goforth (the good one from last year) came in for relief.  With one out in the eighth, Evan Button struck.  We were five outs away from Omaha, and Evan Button couldn't stand it.  On a routine ground ball, Evan picked it up and threw it into the ground in front of Matt Smith.  That allowed Danny Hultzen to reach base, and the Cavaliers scored two unearned runs to claim the lead and the win.

Sunday was a disaster.  The error had deflated the Rebels to the point of no return.  Nathan Baker tried to pitch us to victory, but he did not have enough.  UVA claimed an easy 5-1 victory and dogpiled on our mound.  Another team had found its way to Omaha through Oxford.

Are we at all surprised by this?  I'm not.  It's a classic "We Are Ole Miss" moment.  It's like 2005 when the eventual national champs come to Oxford to break our hearts.  Sort of like 2006 when streaking Miami came to town and crushed what seemed to be a team of destiny.  2009 just added to the repertoire.

Do you think that Bianco learned anything? He's says he has not.  That's arrogant of him.

Here's a video from the post game press conference with Evan Button.

If you want to get angry with UVA, watch this video.