The great Rebel of the Decade race begins with arguably the best Ole Miss football player since 2000 facing off against the definitively best softball player in Ole Miss history. How do you compare the career RBI leader against the Super Bowl winning quarterback? With all respect to Lauren, is there any argument? Can even the Cup's resident legal analyst make a straight-faced argument about a softball player against anyone named Manning? 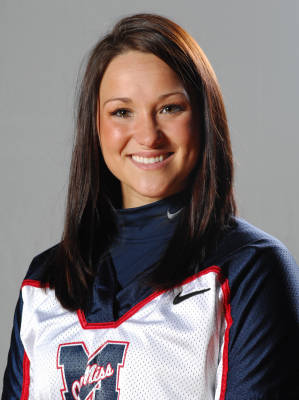 Well, first off, she ain't that hard on the eyes.

Second of all, while Eli may be a superstar in Ole Miss lore, Grill has pushed her program as far as anyone before her has. At Manning's best, he brought his team to the brink and tripped over his center. For all the excitement he brought to the program, at times he could not deliver. You can argue for days about a handful of football stars, any of which might be the shining star of the gridiron over ten years. Lauren Grill is, no doubt, the best of her sport ever to wear red and blue. She was the first softball player at Ole Miss to be named a First Team All America selection. She was named All SEC as a senior. She owns the school record for hits, runs, RBI, walks and total bases, as well as the highest career batting average, on base percentage, and slugging percentage. So, pretty much everything.

Nevertheless, even with the superstar bat, the Ole Miss softball team still has not achieved an NCAA Tournament appearance. While missing Atlanta was a disappointment for the Manning-led Rebels, it was, nevertheless, a post-season appearance. Grill, despite being queen of her hill, did not have quite the mount to climb.

We might as well be honest - young Ms. Grill is the Alcorn State of our little dance. But that, I submit, is evidence of the strong decade we've had. Voting ends Saturday at Midnight Eastern Time.