On Deck: Swine come to Oxford

Share All sharing options for: On Deck: Swine come to Oxford

What Mike Bianco has done with this team is nothing short of phenomenal.  A team which in April had no offense and too many pitching question marks to be successful has gotten hotter than the Mississippi Delta in August.  Once again, Bianco's team is doing well in the regular season.  With Pomeranz pitching on Fridays, we have to feel good about our chances.  On Saturdays and Sundays, our bats and defense have done well enough to cover up our pitching atrocities on the mound.  Hey Hightower and Barrett, do y'all even practice together?   Anyway, the Diamond Swine are on their way to Oxford for one of the most exciting series of the weekend in the 48 contiguous states. 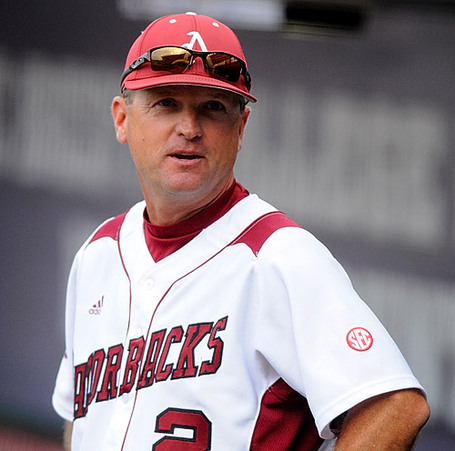 Dave Van Horn hates the regular season, but he loves going to Omaha.

Last season, the Rebels swept the Hogs in Fayetteville to claim a shared SEC Title.  In the all time series, the Hogs lead 33-27.  In the last 10 contests, the Rebels lead 7-3.

What's on the line?  As sutpens wonderfully outlined yesterday, the SEC West is up for grabs in Oxford this weekend.  For the first time in recent memory, we actually control our own destiny in the SEC West race.  Last season, MS State had to take a game from LSU on the final weekend to help us get the tie.  Bianco has a shot at his first outright SEC West title.  All we have to do is keep winning.  With a victory this weekend and a continued slump by the Hogs, we have a chance at a national seed.  If they recover, they almost have a national seed on lockdown.  All I'm saying is there's a chance.

How them Hogs been doing?  The Hogs began the season on fire (just like 2009).  In their first 39 contests, they were 33-6.  They also began 12-3 in their first 15 SEC contests.  It looked as if no one would be able to catch them (just like 2009).  Also of note, they've only lost one Friday night contest all season, and that came on April 2nd to Kentucky.  Since the hot start, they are 2-4 in their last six contests.  They've dropped a series on the road at Florida and another last weekend at home to Auburn.  In both series, they've won the first game only to drop the next two.  Van Horn says he plans on using all of the pitching he can in the first two games to make sure they win this series.  He'll worry about Sunday when Sunday arrives.

So, what is the problem?  For starters, their offense which was really potent has been rendered impotent by quality pitching.  Their pitching which was phenomenal at the beginning of the year, has disappeared as of late outside of Friday night starter Drew Smyly and other weekend starter DJ Baxendale.  The telling story is the dichotomy between the record against good/bad opponents.  Against SEC teams with losing SEC records, they are 11-1 (UGA, MS State, Kentucky, Alabama).  Against SEC teams with winning SEC records, they are 3-6 (LSU, Auburn, Florida).

On the offensive side, Arkansas has some of the most explosive players in the SEC.  Zack Cox leads the charge with a .443 batting average which is good enough for 2nd in the SEC.  Brett Eibner has an SEC best 16 home runs and he and Andy Wilkins lead Arkansas with 55 RBI a piece.   As a team they bat .323 and score 8.5 runs per game.  Defensively, the Razorbacks are allowing 4.7 runs per game and have an SEC ERA of 5.05.

Pomeranz looks to keep dominating opponents on Friday nights.  He has an SEC leading 104 strike-outs (64 in SEC play), and he has yet to lose this season.  He needs 24 more to take over as the career strike-out leader for Ole Miss. Smyly has been dominant as well this season.  In his last five starts, he has pitched two complete games.  The danger here is Smyly will pitch a complete game and Pomeranz will only last his usual 7 innings.  Hopefully, Pom will not go to three balls on every batter and will have some quick innings.  Remember, Pom, a groundout to first using two pitches is just as good or better than a strike-out using 7 pitches (foul-offs, people).

Barrett is looking to recover from a rough month of April in which he did not get credited with a win and was tagged for two losses.  He has had trouble controlling his slider, and he and Hightower have combined for a terrible amount of passed balls and wild pitches.  We desperately need him to return to early season form to finish strongly.  Baxendale is making only his third start of the season on Saturday.  He leads the Hogs in appearances at 20 and has 34 strike-outs in 40.1 innings pitched.  Overall, he has a 3.79 ERA.

Both Bianco and Van Horn are going to see how the first two days play out before deciding who to start on Sunday.  As I wrote earlier, Van Horn has said he is going to use all of the pitching that he needs to the first two days to ensure a series victory.  I foresee Bianco doing the same, so it'll probably be a wash-out.  However, I am hoping for Crouse to get the opportunity for a Sunday start.  Maybe we can use Goforth for an inning or two.

Predictions:  Arkansas is slumping and we are hot.  Just 8 games ago, it was LSU hot coming into Oxford and we were slumping.  The only reason I mention this is because things can change quickly in baseball.  I want to have faith in this team, and I really do.  However, I'm concerned about our pitching woes on Saturday and Sunday.

I'm trying to be an optimist here.......  WE WIN TWO OF THREE and get in the mix for a national seed.