Share All sharing options for: This Week's TLV Article 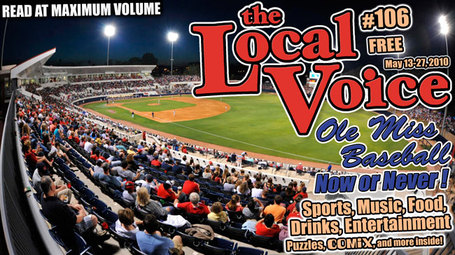 You can click on the picture to read the Local Voice in PDF format. The full text of our article follows below the jump. Yes. It talks badly about the baseball team. No. Brian Walker's Elbow did not write it.

Never a Matter of "If," but rather When

This past weekend, with the lead in the SEC’s Western Division on the line, the Ole Miss Rebel baseball team did exactly what only a few seasons of Rebel fandom of, really, any athletic endeavor would lead one to expect: they lost, and did so in embarrassing fashion.

They crapped the bed.

They succumbed to analysis paralysis.

The SEC West crown seemed all but a sure thing with Arkansas coming to Oxford. Of the Rebel opponents after the Razorbacks, only Auburn was intimidating. All the Rebels needed to do was take two from Arkansas. Then, they went sixteen innings without scoring a run. Yes, the Rebels only took one game of three from Arkansas, and when comparing remaining schedules, they don’t appear likely to overtake the school where Houston Nutt spent the first two years of his college career. No matter which way you put it, the Rebels did what we all knew they would and that is fail to rise to the occasion. Bianco and his boys went toe-to-toe with Dave Van Horn and his Arkansas Razorbacks—an admittedly good baseball team—and simply couldn’t get hits, runs, outs, or wins when they mattered. Yes, fault the coaches and fault the team, you as a fan have such a right. But, you as a fan also had a feeling way deep in that unpleasant part of your gut that such a thing would happen and, if it were not to have happened this past weekend against Arkansas, you would have presumed it to happen against any of our upcoming opponents. Why, you may ask.

Well, such flops and failures are endemic of Rebel baseball. Don’t believe me? Look up "Choke (sports)" in Wikipedia. Scroll down to "Baseball". No, I did not write that just now for the sake of this Local Voice column; that was there already—and likely the product of an enterprising Mississippi State fan.

And, right on cue, other Rebel athletics endeavors have fallen in line with the status quo.

Whether it be promising redshirt freshman quarterback Raymond Cotton’s injured shoulder, hyped junior college signee Randall Mackey’s failure to arrive on campus in time to be a legitimate threat to start at quarterback, or the fact that an overwhelming majority of our offensive yards left for the NFL, something is hindering whatever optimism we may foolishly have regarding our football team.

As well, just when Rebel basketball seems on track to be a complete, deep team with finally enough talent to break into the NCAA tournament for the first time in a decade, our team’s most passionate and all-around capable big man, Murphy Holloway, decides to transfer back home to the Palmetto State within a week of our most purely talented player, Terrico White, opting for the NBA Draft in lieu of his junior season. Naturally, we fans respect their decisions and wish them well along whatever paths their lives take them, but we cannot help but think that they have sort of deflated our ambitions. Now we’re staring at an embarrassingly week schedule and a roster full of guys that haven’t proven they can be counted on in the clutch, nor have they demonstrated real basketball chemistry. Well hell, Terrico White also didn’t prove that, but at least he could take over games every now and then and drop some NBA-level talent on an opponent.

But, back on our initial baseball-oriented track; is this approach to our season and team some sort of defeatism? Honestly, yes, but all hope is not lost. We could still advance to Omah-… an NCAA super regional. We just need to win. It would take a virtual meltdown at this point for the rebels to fail to reach the SEC tournament, which takes the eight best teams in the conference to Hoover, Alabama to duke it out for the title of "luckiest group of guys in the conference." Our chances even look good to host a regional, since our bids to the NCAA are always super-competitive.

We know they will break our hearts, but, like a hopelessly battered wife, we continue to return for punishment. We still hold out hope. Perhaps the company of our Rebel colleagues is just that enjoyable. Perhaps our unique, off-beat, pseudo-plutocrat method of celebrating Ole Miss athletics is that much fun. Or perhaps beating State and LSU feels just that good. Whatever it is, we keep coming back and we keep enduring the punishment of Rebel fandom because it is undeniably who we are.