RCR- The Big East, in an effort to pre-emptively combat any potential Big Ten or SEC expansion, has extended invitations to a host of schools throughout the Southeast to join the fledgling conference.

"We have heard the talk, namely that the Big Ten is approaching Rutgers, Notre Dame, Pitt, and many other teams we govern, and we wanted to combat that talk by, in a way, sweetening the pot. If we can add some quality programs to our already quality conference, what incentive would these teams have to leave," said John Marinatto, Commissioner of the Big East.

While the extended invitations remain private, they are far from speculative. "This will happen, and it will happen soon," Marinatto ensured the media gathered at this morning's press conference. While he would not reveal which schools were being considered, he did make mention of "Southeastern institutions with close ties to television markets in the Carolinas, Georgia, and New Orleans."

Sources have confirmed with Red Cup Rebellion reporters that such an invitation has been extended to...

...The University of Southern Mississippi. 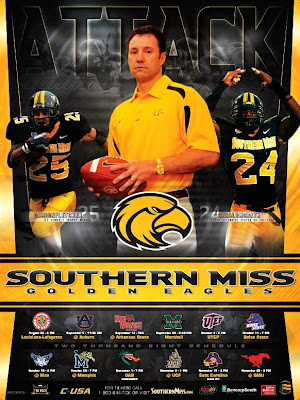 While unable to confirm or deny, Big East officials contacted by RCR did suggest an interest in the Golden Eagles.

"We are looking for schools that we think could, perhaps one day, with the right resources and a little luck, could compete with the SEC," stated a Big East official who wished to remain anonymous. "We feel there are some teams in Missis--I should say, I mean, the Mississippi area that could, who knows, help us out in the future."

How would Southern Miss benefit the Big East? For starters, facilities. One of the most impressive aspects of the athletic department is a "historic," college football stadium known as "The Rock." A south endzone structure was recently completed bringing luxury boxes to the facility along with more bleachers, however, attendance did not see the expected spike due to a concurrent construction of both a new Chili's and an O'Charley's.

"The Big East opponents would probably get me to splurge for the $200 season tickets," said longtime fan, Charley Hibbert, while licking the sauce off of the ends of his bare baby back rib bones. "I mean, I'd be really excited about playing Virginia Tech and Miami...huh? What do you mean they're in the ACC now? SOUTHERN MISS TO THE TOP!"

Hibbert then conveyed the popular opinion in Hattiesburg that the program is ultimately destined for the crown-jewel of college football, the Southeastern Conference.

"We'd kill Ole Piss and Pissippissi State," he said, doubling over in laughter. "You see what I did there? I mean, hell, we aren't suckling off the teat of Alabama and Florida, and we're still miles ahead of both those programs. Remember when Tyrone Prothro broke his leg? WE DID THAT!"

Big East officials did give comment on the possible addition of the Southern Miss football program.

"If we were to expand that way, Ole Miss would bring titles, dozens of All-Americans and a great Southern tradition to our conference," the official said. "Oh wait, you meant Brett Favre's school? I thought they were Division-II? No? Well, we'll take them, we're on a sinking ship here. All hands on deck!"

The Big East admittedly said the Golden Eagles basketball program would be welcome despite the strength of the conference regarding basketball and how that compares with an oftentimes struggling Southern Miss program. Golden Eagles men's basketball coach and local nightlife columnist Larry Eustachy was awoken from a summer hibernation at his Hattiesburg home to see if he could handle the pressure of a big six conference season.

"What the fuck are you assholes doing here again? I paid the damn repo men already and they said I could keep my car," he said, before swigging his bloody mary and hustling three co-eds out the back of his home.

After a very brief moment of clarity, Eustachy gave a summary of the state of the program

"Reed Green Coliseummakes The Tad Pad look like Rupp," he said. "We've been using mobile homes as locker rooms for years now, but a recent generous donation allowed for space INSIDE the coliseum for us to use."

A hallowed tradition at the arena during the mobile home years was the forcing of the players to run up the aisles of the bleachers to the trailers at half-time, Eustachy explained.

"Really, I wish it was still like that," he said. "Can you fucking imagine Georgetown doing that shit? I mean, shit, even Rutgers would stop a hole in our asses."

"Yeah, really, an addition like that would really only be for cannon fodder," admitted an unnamed Big East official, "but it'd be kinda neat to see Syracuse hang 120+ on those guys. It'd be like the Harlem Globetrotters or even one of those new And-1 Mixtapes the kids love. Really, now that I think about it, such events would be a real revenue generator."

While their recent accomplishments in basketball are few, USM did take a Cinderella-like ride to Omaha last year in the college baseball World Series, beating SEC power Florida in a Super Regional in Gainesville to punch its ticket to the elite eight of the sport. The Golden Eagles boast roughly 3,000 fans at each home game including a revelry area known Right Field Roost filled with below average looking drunk women and obese men grilling out while fawning over football great Ray Guy and shooting guns into the air with former RB Damion Fletcher.

When asked about the benefits of future expansion to Big East baseball, Commissioner Marinatto said "What? What are you talking about? The hell is that shit?"

When examining expansion talk regarding other major conferences, a great concern of conference commissioners and officials centers on television markets and how certain expansions could affect that. In a study conducted by the RCR Scientific Research Institute, the Hattiesburg-Laurel-Petal-Richton-Perry County media market could add a possible Neilsen rating of roughly .03 to any given Big East game. When asked about the impact of that area to the television market. Big East officials gave a candid response.

"This move would never happen," Commissioner Marinetto said. "Rutgers women's volleyball is a better draw. Wait, who again, Southern Miss? Ain't that that SEC school? No? Yeah it is, the one in that town with the thing, you know? Ackbar? Really, no? Who in the fuck is Southern Miss? Wait, who are you? Get out of my press conference."

ED: One Man, as you may know, lives in Hattiesburg. People in his neck of the woods legitimately believe they're going to get picked up by the Big East during these expansions. They also give him hell for being an Old Piss fan. He and I wrote this to demonstrate the lunacy of such sentiments. SOUTHERN FANS WHO HAVE STUMBLED ACCROSS THIS: THIS IS A SATIRE. THIS IS NOT REAL. RETURN TO YOUR HOMES, DISARM YOUR FIREARMS, AND GO TO BED.