Before the season started, BWE and I postulated that the outfield would not necessarily be a strong point for the Rebel team this season.

Do-everything outfielders Jordan Henry and Logan Power had departed along with successful pinch-hitter Jeremy Travis. We were looking at the prospect of David Phillips and a transitioning Tim Ferguson and Matt Smith holding down the grass for Ole Miss.

Offensively, the outfield has provided some pop and leadership. Defensively, it's an almost error-free group of platoon players due to the injury of Matt Snyder at 1B.

However, one player continue to stick out as the weak link in this chain. A player who showed early on that his potential can only be tapped into when playing 200+ RPI teams. 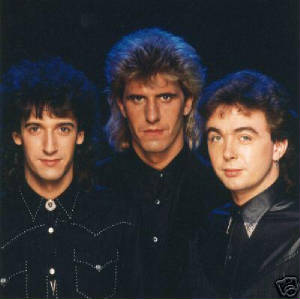 At least our OF has produced more hits than this Outfield...boosh

Sorry, David Phillips, you have not progressed from last season when you would send shivers down the spine of every Rebel seamhead when you stepped into the batter's box. "Hey, don't be so hard on him! He's batting .255!" you might shout in protest.

Great, he's also sporting a healthy .172 in SEC play. He did open up the regular season by blasting four home runs in the first two weekends. He has since hit six more home runs playing NCAA baseball on his Xbox.

Nine K's in 29 AB's does not help his case either. He has drawn six walks, which boosts his OBP to .333 in SEC play. So, maybe just don't swing so much? Maybe the opposing pitchers will utilize the scouting reports that say Phillips would take a swing at any pitch coming relatively close to the chalk outlining either batter's box...then walk him when he doesn't swing. It's our only hope.

We're not saying Phillips cannot improve. This weekend against UGA, he could find a groove. It's baseball. Anything can happen, but just don't expect too much from Phillips. He does have a perfect fielding percentage in SEC play, so he's got that going for him. Grade: D+

Tim Ferguson, thanks for being great in nearly every aspect of the game. Perfect fielding percentage in SEC play, .400 average in SEC play and leading the team in stolen bases on the year. Plate discipline could be a smidge better with eight K's in 40 AB's in SEC action or 25 K's in 121 AB's overall.

Ferguson has been hitting out of the three spot in the line-up this year. The only thing he really lacks is some serious power, but with the other attributes he brings to the plate, he is more than serviceable for the Rebels. Grade: A

Taylor Hashman has seen limited action in SEC play this season but has compiled five starts due to Matt Smith moving over to 1B in Matt Snyder's absence.

I can't rip on Hashman too bad, because I don't think he's meant for starting duty. He should be relegated to pinch hitting and his above average arm makes him more of a defensive substitution in my opinion.

Hash has a .118 average in 17 AB's in SEC play and the same OBP. He has relatively decent speed for this team, stealing three bases so far this season. If he can get things to slow down a bit for himself, he may be able to garner a few more opportunities on the bases. He has no walks in SEC action, which he should be battling for considering his skill. Last year, he was able to muster 18 walks in 39 games played while only hitting .210.

For a senior, we should expect a little more progression, but I hate to see regression in this case. Grade: C

Tanner Mathis is a freshman and batting .300 in conference play. At this point, I'd rather have him in the game than Phillips. If we could have Ferguson, Mathis and the soon to be mentioned Matt Smith in the OF, it would be very solid from an offensive and defensive perspective.

As Mathis gets more AB's, his pitch selection should improve. He has six K's in 20 AB's, which is nothing spectacular, and he only has one extra base hit in SEC play. Mathis seems to be getting better as the year progresses, and I think the only concern would be having him burn out before the season ends. Otherwise, the sky is the limit. Grade: B

Matt Smith is going to leave after this season. Let's go ahead and get that out of the way. He's batting .381 in conference games with a slugging percentage over .750. By far, the best power hitting option for Ole Miss.

The big knock on Smith in his first two seasons was the number of strike-outs he amassed. He still takes big swings with no remorse for any pitcher, but he misses on less of them. He has only five K's in 21 SEC AB's and 16 out of 86 in overall action.

Every time Smith is at the plate, I expect something big to happen. Not necessarily a Stephen Head-like blast that hits Oby's roof, but the opposite field extra base hit that he has developed over the past two years. I think the offensive pressure rests firmly on Smith's broad shoulders. My hope is that he won't disappoint. Grade: A-

Cliff Vaughn and Brooks Oursler....have no grades. All courses incomplete.

So overall, a GPA of 2.8, which is much, much higher than my own while attending our fine public university. If Bianco continues to use a platoon of five players in SEC play, I don't think the production is going to greatly improve. Get Phillips and Hashman involved through DH-ing and PH-ing opportunities and pull some double switches for defensive substitutions. They are seniors, but they have not played up to this point to deserve a starting role.