What? What's going on? What day is it?

I just woke up from a glazed ham, mac-n-cheese and Bud Light induced coma from Easter. Sounds like a great way to spend a Sunday – apparently our baseball team decided to be in a catatonic state all weekend, however.

All is not lost, however. For this is baseball, and wacky, wild stuff like this happens all the time. 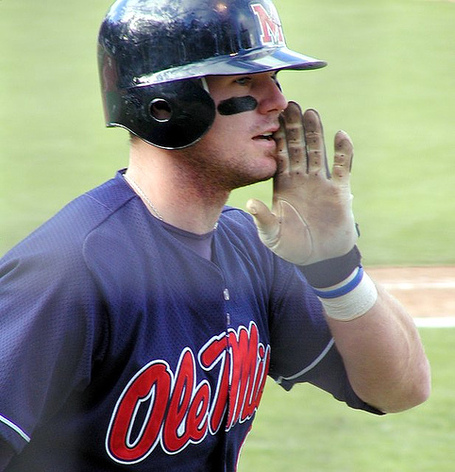 Going: Friday –  When Kevin Mort goes 4-for-4 and Drew Pomeranz is on the bump, it's a great day to be a Rebel. Matt Smith and Tim Ferguson both had dingers in this one, which was close until Vol starter Bryan Morgado fatigued in the sixth inning and gave up the deciding runs in the game. Rebels win, 7-3.

Going: Saturday – Matt Snyder is a freak human being. Dislocates the same shoulder twice within three weeks of each instance and was back this weekend to hit a two-run shot to score the only two runs for the Rebels. Aaron Barrett put Ole Miss in a position to win giving up three runs over 6.2 innings of work. The bats were unseasonably cool on Saturday, which has been the game the Rebels have had little trouble winning this season. Vols win, 5-2.

Gone: Sunday – David Goforth is probably our best Sunday option right now. He threw 4.1 innings, gave up three runs(two earned), struck out four and walked three. This is after starting against Mississippi State on Tuesday. With a proper week's rest, I think Goforth could go five plus innings and have fewer control issues. The defense absolutely imploded on itself with the game tied at six in the ninth. The Rebels also had a bases loaded chance go horribly wrong(double play) in the eighth to end the inning. It was an unusual ending to an otherwise good college baseball game.

The good news is that LSU dropped one game to UGA in Baton Rouge to salvage some hopes of competing for an SEC Western division title.