SCENE: December 2009 in Mike Bianco's office in Oxford, MS.  Pictures of the execution of various bunt plays adorn the walls all around his office:  three drag bunts, two sac bunts, and eight squeeze bunts from various Ole Miss teams.  Across from his desk, there sits the 2006 SEC Tourney Champs trophy.  To its left is the 2009 SEC Champs trophy.  Rob Reinstetle sits nervously.  Bianco lights a cigar and leans back and forth in his chair.  Creak.  Creak.  Creak.

BIANCO:  Rob, I'm not so sure this thing is working out.

REINSTETLE:  [rubs sweaty palms together]  What's the problem coach?  We won the SEC!  We go to Super Regionals.  What else could you want?

BIANCO: [smashes end of cigar into the ash tray.  crosses hands as he puts his elbows on his desk and leans forward as if praying]  We only scored eight runs in the Super Regional last season.  LESS THAN THREE RUNS PER GAME, ROB!!!  IF WE WANT TO GET TO (EXPLETIVE) OMAHA, WE'VE GOT TO SCORE MORE RUNS!

REINSTETLE:  With all due respect coach, I am not sure if we can blame our hitters for that one.  Virginia's pitching staff is really talented, they're going to be top ten this year, and it was a tough match-up.  Also, it doesn't help that in game three, we were bunting in the first inn------

BIANCO: [interrupts mid-sentence] DON'T YOU DOUBT MY DECISIONS!  I AM A COACHING GOD!  DO YOU NOT SEE WHAT I HAVE DONE FOR THIS PROGRAM!  WE HAVE TO GET TO OMAHA!  WE CANNOT WIN A (EXPLETIVE) GAME THREE!

REINSTETLE: [takes a moment to think] No offense, Mike.  Ever since you over-pitched Bittle's arm, we have not been the same team.  Yeah, we got a couple of Sunday wins, but something was seriously wrong with this team in the post-season.  Do you remember the SEC Tourney?  Our pitching got smoked.  Oxford Regional?  We lost game three to Western Kentucky.  Then, we tanked again in game three.  I'm not sure it's our hitting....  Maybe..... Maybe...

BIANCO: [slams his first onto his desk] Maybe it's what? MY COACHING DECISIONS?

[the door slams shut.  the lights begin to flicker.  a slight hissing sound begins to rise in the room]

BIANCO: [takes off his hat and rubs his head with the palm of his right hand]  It's been happening on and off since the summer.  I don't know what it is.

REINSTETLE:  Coach, this is not funny.  If you want me gone, just say so.

[the door slams again.  the blinds shuffle as if a 100 mile an hour wind were sifting through them]

REINSTETLE:  I'm through with this, Mike!  [Reinstetle screams and flees]

[now Bianco is left alone to deal with evil spirit]

BIANCO: What do you want?  Who are you?

UNKNOWN VOICE:  Riddle me this, riddle me that, who's afraid of the big, baseball bat?

BIANCO: No one is afraid of a baseball bat!!!!

UNKNOWN VOICE: When's a donkey spelled with one letter?

UNKNOWN VOICE:  When it's u! 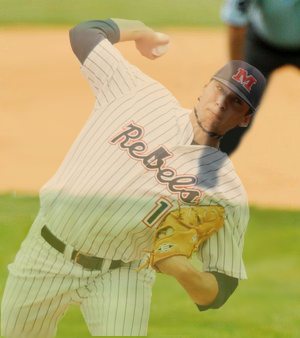 [the ghost of the bittler emerges through the door]

BIANCO:  Scott?  What the (expletive)?

BITTLER: I WANT MY CAREER BACK!  You knew better than to throw me on Sundays!  I couldn't handle five innings at a time.  You think you are a coaching god!  You think you know everything and you are right!  I am a reliever!  I'm not a starter!  First the Yankees ordeal and now I have to sign for pennies on the dollar?  All because you couldn't find a Sunday starter and threw me out there?

BIANCO:  [frighteningly cowers into his chair] What do you want?  I cannot go back and fix it!  How can I get you to leave me alone?

BITTLER:  [his ghostly voice shrinks down to a whisper] You know how I feel about this.  I know you cannot fix it.  However, you must be punished!  Next season, you will be cursed in every game three that you play!

BITTLER:  Ok, then.  Here's your one chance for redemption.  I will grant you a reprieve if you can....

BIANCO: [anxiously interrupts]  WHAT?  I'LL DO ANYTHING!

Do you think Mike will solve the riddle this week?  Or will the curse continue?