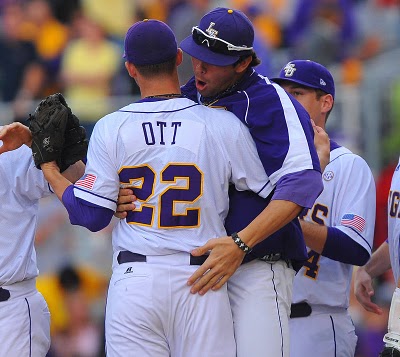 The only clinch the Tigers received this weekend.

This weekend, Ole Miss rose to the occasion and swept the Tigahs of Baton Rouge.  Playa praise and Bianco hate all come after the jump.

During last week, I remembered that feeling I had about this time last year when the showdown with #1 Georgia/Double Decker weekend was approaching.  It was the same feeling I had on Fridays in high school before football games.  That nauseous feeling I got each time I stepping into the batter's box when I played baseball in high school.  I had it all over again.  Could we win one against LSU?  Could we somehow get two?

Instead of using the Going, Going, GONE format we usually use for recapping each game, I am going to give each player a little shout out.  If you want a recap, go to Ole Miss Sports.com where they even have highlights.  I was able to see every inning over the last few days, and I want to give credit (good and bad) where credit is due.

Tim Ferguson was an integral part of the Saturday success by going 7 for 10 on the day with a homer and two RBI.  He was seeing the ball really well, running the base-paths well, and even robbed Austin Nola of a home run in game two that saved the day for us.  He struggled Sunday and went hitless, but his Saturday performance was one to remember.

Kevin Mort has been solid defensively and offensively this year.  We recruited him for his glove and his bat has been a bonus.  He was 6 for 13 on the weekend and had the most important RBI of all: the game-winning walk-off single.

Zach Miller struggled mightily at the plate in the first two games going a combined 0 for 9.  He had an atrociously bad bunt on Saturday in the second game.  The pitch was above his head, and he popped it to the third baseman.  If he had succeeded, Mort's fly out to right field would have won the game.  On Sunday, he righted the ship with a two hit performance.  Even if Miller is having an off day offensively, he finds a way to make great defensive plays.  One example is when he fielded the ball, tagged the runner that was trying to advance to third, and threw over to complete the 5 to 3 double play.

Matt Smith was atrocious at the plate this weekend.  He was 1 for 11 for the series.  He did pick at good one hit as his leadoff double in the bottom of the eleventh last night allowed him to score the game winner.  Matt also misplayed a couple of balls in the outfield.

Matt Snyder hit some bombs this weekend.  In the first game, he went 4 for 5 with two homers and SIX RBI.  In game two, he struggled going hitless and hitting into a double play.  Today, he went 2 for 3 with a solo shot in the eighth that really got us back into the game.  That's a combined 6 for 17 with seven RBI on the weekend.  If you are wondering, he has hit 4 dingers in 5 at bats against Anthony Ranaudo.

Alex Yarbrough is quite an asset to this team.  He hit the walk-off single up the middle on a 3-2-2 pitch last night.  Today, he hit his first career home run to tie the game in the eighth.  Defensively, he lacks a little range but plays hard and makes routine plays.  He had 4 hits in 13 ABs with 5 RBI.

Taylor Hightower had a pretty good weekend.  He threw a couple of guys off who where trying to steal.  He had three hits in eleven at bats, but it seemed like he got his hits when it really mattered (i.e. getting a hit in the bottom of the ninth to eventually score the winning run).

Taylor Hashman put together some of the best at bats of the weekend from either team.  After sitting behind David Phillips for the majority of game one, he comes in and gets a hit in his only opportunity.  Phillips again started ahead of Hash in game two, but Taylor came up big with a two run shot and then a bases loaded double to bring his RBI total to 5 for the game.  In game three, he was 2 for 2 with an RBI before Bianco put Phillips in.  Hash has the ability to sit back and wait on the off speed pitches.  His homer in game two was on an off speed pitch that he sat back on.  Take notes rest of team.

Miles Hamblin tries hard.  He plays good defense at first, and he had a two run shot in game one.  He was 2 for 9 in the series for 3 RBI.

Drew Pomeranz and Aaron Barrett were squeezed hard by the umps.  They weren't given anything, and had pretty difficult outings.  I was happy with what I saw out of Barrett though.

Our bullpen was fantastic this weekend.  I was happy with Rory in the first game, and Crouse was dynamic in the second game.  I forsee Matt Crouse taking over on Sundays after this midweek action finishes up.  He'll relieve our pains on Sundays and let Goforth pitch an inning or two in middle relief on Sundays.  Trent Rothlin had a great weekend and did a bang up job on Sunday.  Brett Huber was sensational in relief, and it looks like he has this "closer" thing figured out.

DAVID PHILLIPS never needs to play again!!!  For some reason, Mike Bianco thinks that David being left handed gives him the upper hand against right handed pitchers.  That would work if David had any clue what he was doing in the batters box.  How can someone justify playing him over Taylor Hashman?  He went 1 for 5 in the action he did get.  What makes it worse is Bianco puts him in to the big hit and he consistently does not deliver.

MIKE BIANCO improved to 17-17 against his alma mater for his career at Ole Miss.  That is an impressive record, and I doubt there are many coaches who have a .500 record or better against LSU.  His team won despite his atrocious coaching.

Final thoughts....Our RPI jumped from the forties to #23 as of right now on Warren Nolan.  If we finish the season really strongly, we will host a regional.  We should be excited about the brand of baseball we played this week.  We have won five in a row.  Don't get too excited about this team as it still has many flaws and had to play at its best to barely defeat a poorly playing LSU club.