TLV #104 - Where we talk Spring Football amid Double Decker Columns

Share All sharing options for: TLV #104 - Where we talk Spring Football amid Double Decker Columns

I mean, we're really not qualified to discuss Double Decker anyway. So Red/Blue it is! Click the image for PDF or read the column after the jump. 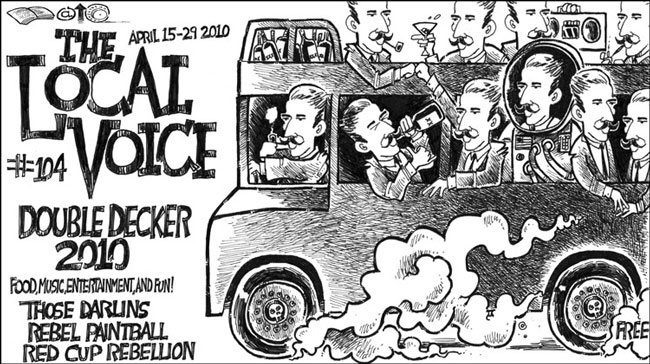 Football? In the Spring!? What in the Hell is this nonsense?!

As unorthodox as celebrating and observing Southeastern Conference gridiron greatness while our fair campus' oak leaves are budding, rather than falling, may seem, Spring football is a regular, important element of the "amateur" version of America's most celebrated sport.

Well, kinda. Yes, it's regular, as in "it happens every year" and "it's regulated by the NCAA." But is it important? Let's determine that by taking a look at what actually happens during these March and April workouts and scrimmages.

First of all, and certainly most importantly, the players are actually up and moving around. Instead of participating in the Jamarcus Russell/Chris Strong offseason fitness plan-a steady diet of catfish dinners, grain alcohol, and [ILICIT SUBSTANCE REDACTED] accompanied by a vigorous Xbox workout-our football heroes are on their feet running, jumping, throwing, catching, hitting, grappling, and engaging in various other generic yet athletic verbs. As silly as this reads, such is crucial to keep our team of somewhat-less-mature, barely adult men disciplined and up to snuff during a torturously long offseason.

Secondly, new things are being learned and new people are learning them. Coaches, their schemes, and their attitudes are constantly in flux. Just this offseason, our Rebel offense changed overnight when then-offensive coordinator Kent Austin left seemingly overnight to take the head coaching job at Cornell (yes, that Cornell) making room for now-offensive coordinator Dave Rader. Rader will, as with any OC, bring his own playbook and coaching styles so now is as good a time as any for the players on offense to figure him out. This, of course, is just one example of many happening all over the country at every level of the game. Teams evolve to hopefully improve and such evolution happens most turbulently during the offseason.

And finally, the players are getting to have some fun. Let's not kid ourselves here: these guys came to Ole Miss to play football. They didn't come here for a Bachelor's or "the college experience" or whatever else the average student looks for when applying for admission; they came here to keep us fans entertained while running around a field, wearing plastic armor and participating in the organized chaos of human sport. Of course the players can work out and run through plays on a small, athlete-led scale any time they want but, per NCAA regulation, this is the only time they are going to get large, aggressive practices led by their coaches until August. It's fun for them.

But what can we ascertain from this, and how much of this are the players really taking away?

The players are, naturally, getting the better end of this deal per the aforementioned reasons, but even they are not getting as prepared to play football as they would during, say, the week before the LSU game when they have had plenty of time to actually study and prepare for a particular opponent. Right now, they are merely running through basic drills and using a watered-down playbook for nothing other than to keep their minds focused on football and their bodies in shape to play.

But we fans aren't really watching anything of import. Oh yeah, you can try your Rebel damndest to search for future stars or figure out what kind of team we're going to have come September, but all of it will be in vain.

Does a particular set of plays look "innovative" and "fresh"? Then you've likely stumbled upon a broken play carried out by confused freshmen and scout-teamers.

Does a particular halfback look like he is going to have that long awaited "breakout" year? Okay, then his fibula is going to "break" and poke "out" of his shin in a bizarre escalator accident.

So why do we bother with a Red/Blue game? Why do we trek to the practice fields en masse to watch Nathan Stanley run for his life from Kentrell Lockett? Because it's fun, that's why. It's football and it's springtime. We like hearing the clack of the pads, seeing the cleats tear into the turf, and cheering for meaningless touchdowns because that's simply who we are. We're fans.

If it's Saturday and you're holding this paper in your hand, set it down (you'll want to finish it later) and make your way to Vaught-Hemingway Stadium and, just for a few hours, be a Rebel Spring Football fan.