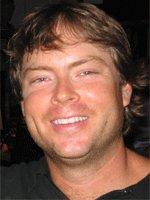 We at the Cup have many enemies. There's GonzoHog (sorta), ramblinrebelman (sorta), Kleph (you bastard), the guys at And The Valley Shook (not really), David Brandt (BURN BRANDT BURN) and the other Ole Miss sports website "journalists" who hang out on the internet all day to talk about Rebel sports. Yancy Porter is one of them.

Why is he an "enemy?" Because we're player haters, that's why. Yancy spends all day around Rebel athletics. He gets to rub elbows with coaches, chat with players, attend any and every sporting event he'd like, and do it all while living the college town life. If you for one second do not think that any one of us assholes who writes for this website wouldn't trade whatever job we thanklessly and soullessly endure every weekday for Yancy's job then you're being foolish. Hell, toss a paycut, public lashing, and a few purple nurples in there as well because I doubt it'd deter us. His job is easy (dear Scout.com subscribers that take the time to "thank" Yancy for all of his "hard work" in the Scout forums and chats: you're rubes), fun, and likely pays well enough to eke out a comfortable existence in Oxford.

Hell, Yancy doesn't somehow even have to be good at his job to turn it into a career. The guy is notorious for reporting false information (Keiland Williams and Joe McKnight were both going to be Rebels, remember?), writing nonsensical fluff pieces to appear busy (interviews with recruits that include questions about their favorite musicians and foods), and doing neither particularly well (bizarre sentence structure, mixed metaphors, misspellings). He has the ultimate position in that he's doing something he likes, isn't difficult, nor demands good performance. We're jealous. Which is why we get a tinge of Schadenfreude when we read things about the coaches barring Yancy from practices for allegedly taking some (likely creepy) photographs of visiting recruits.

Oddly enough though, we're kinda on his side here. The rule violated wasn't an NCAA nor an SEC rule, just an Ole Miss-specific rule. The rule is also kinda stupid because, guess what, all kinds of people take all kinds of pictures at football practices. And the enforcement is largely unnecessary and somehwat draconian because Yancy isn't going to do anything, especially not deliberately, to hurt the Ole Miss football program. He just isn't. He's both harmless and a bigtime fan. Frankly, with all things considered, it just looks as if Coach Nutt and company are just looking to cover any and all bases and asses with regards to future NCAA or SEC finger-wagging and Yancy Porter was their fodder. It's ok though, he'll just drive his Audi home, eat a big ol' plate of spagiti, wash that off with a bottle of Peeno Noir, play a little Maddon, and hit the sandman while laying back in his bed, looking forward to a new day in the life of Yancy Porter.