Share All sharing options for: Chuck Mullins Award Nominees Announced: You Know Who The Cup Endorses

It was released today that the Chucky Mullins Award Banquet will be held in two weeks at the IPF with Derek Jones, former Chucky Mullins Award recipient and current defensive backs coach at Duke, serving as the guest speaker. Of the senior defenders eligible for the prize, the following have been listed as finalists: Johnny Brown, Jonathan Cornell, Ted Laurent, Kentrell Lockett, Jerrell Powe and Allen Walker.

You know who we're behind. 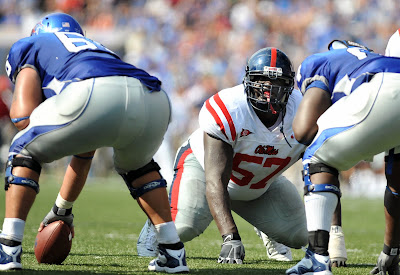 Is there honestly a more suitable candidate? While Cornell has been a defensive mainstay for years and Kentrell Lockett is perhaps the most vocal leader of our team, there isn't a guy in that list that means more to Ole Miss fans than Jerrell Powe.

From the outside looking in, that may seem strange. Most people only know of Jerrell the NCAA headache who is (falsely) rumored to be, among other things, illiterate. They may also know of him as the capable defensive tackle and rarely-used offensive weapon in what Ivory Tower and I dubbed "The Wild Catfish" formation. But, for the most part, people think "oh, big dumb country black guy" when they think of Jerrell Powe.

Which, frankly, is insensitive, untrue, and a smidge bigoted. Ok, he's big, and black, and pretty daggum country, but Jerrell Powe isn't dumb. He's not Carl Sagan, but the boy's hardly a fool. He's also a great defensive tackle who works hard on every play and does what he can to muscle his way into the backfield. But, most importantly, Jerrell Powe is, by all accounts, a great person who loves Ole Miss and truly appreciates his fans, coaches, and teammates. He knows what type of nightmare Ole Miss had to endure (namely, the presence of Ed Orgeron) to get him ready to play college football and, for this, he is incredibly grateful. We fans know this and have returned the favor. We love him because he loves us. It's symbiotic and a little odd; but we like it.

Furthermore, the award is supposed to recognize "courage". Chucky, even after having been paralyzed from the neck down playing a sport which he loved, lived the rest of his tragically short life with an unconquerable spirit. He was a happy, good person under circumstances which would have crushed the spirits of most men. While not at all a parallel to Chucky's situation, Jerrell's is comparable in that he endured years of rejection from Ole Miss administrators, runaround from NCAA paper pushers, and ridicule from opposing fans and media outlets. Yet he kept at it, proved his doubters wrong, and has become a legitimate SEC athlete. Courage indeed, sayeth this bloggeur.

Also, if we were to endorse somebody else, we'd be dead. Go get 'em, Jerrell.