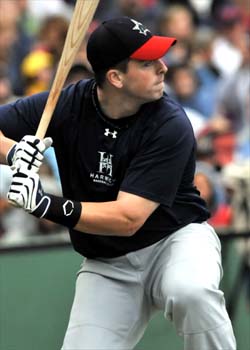 MS State 1B Connor Powers, pictured above, can absolutely mash.

MS State is having an unsurprisingly down year.  Many predicted this to happen as the dogs were selected to finish last the the SEC West, and they have lived up to the billing.  So far, the Dogs are 2-4 in conference play since they were swept by Florida and took last weekend's series 2-1.  MS State's best RPI win so far was over Western Kentucky who is #28 according to Warren Nolan.

Offensively, they are led by senior 1B Connor Powers.  He's hitting .393 with 8 HRs and a slugging % of .719.  Last summer, he won the homerun derby in the Cape Cod league.  Worst of all, he's from Illinois.  CAN YOU BELIEVE THEIR BEST PLAYER IS FROM OUT OF STATE!!!  ARGH!  Also contributing offensively is Jet Butler with a .371 and Luke Adkins with a .321.  As a team, they are batting a surprisingly low .284 which is slightly lower than last season's .298.  As a team, they average 6.7 runs per game.

Defensively, they are allowing 5.8 runs per game, fielding at a .963 clip, and pitching at a 4.86 ERA.  They will send C.C. Watson to the mound.  He's 1-0 on the season with a 2.08 ERA in 8.2 IP.  He's only allowed four hits.  From reading the statistics, it seems like Cohen has used him an inning at a time (8 appearances), and it will be his first start of the year.  It will be interesting to see how he handles the start.

The Rebels will march David Goforth to the hill.  David is 0-1 with an 8.31 ERA.  The worse stat for Goforth is the 6 homeruns he's allowed in 13 IP.  That opponent's average of .333 doesn't look so hot either.

My thoughts... I like the approach Bianco is taking to this game.  Unlike some of our readers, Bianco realizes that we are up the creek without a paddle unless we get our Sunday pitching situation worked out.  Though it may cost us this midweek rivalry game, he is putting David Goforth out there to work his issues out.  This is something that Bianco has done before with pitchers who have struggled in the past.  Will Kline had control issues early on in his career, and he was not having a good season when Bianco started him against MS State in the Mayor's Trophy Game.  Just the week before against Southern Miss, he started a game which we lost 13-6.  He proceeded to pitch 7.0 scoreless innings against MS State in a game that we won 1-0 on a Zack Cozart dinger.  I'm not going to guarantee the same results for Goforth, but it seemed to turn Kline's career around.  He finished that season with a 3.71 ERA and the following campaign with a 3.75 in 2007.  His numbers aren't amazing, but he had some memorable games.

It seems like Cohen is trying to find some pitching as well, and he is also starting a guy who has been a reliever.  Since the majority of you claim I am too negative, I'll make a ridiclously positive prediction.

How's that?  Does the kool-aid taste good?