This weekend, the Rebels took the series from a very talented Florida team that is ranked as high as #2 in the polls.  Though there are some positives from the weekend's action, there are some causes for concern as well. 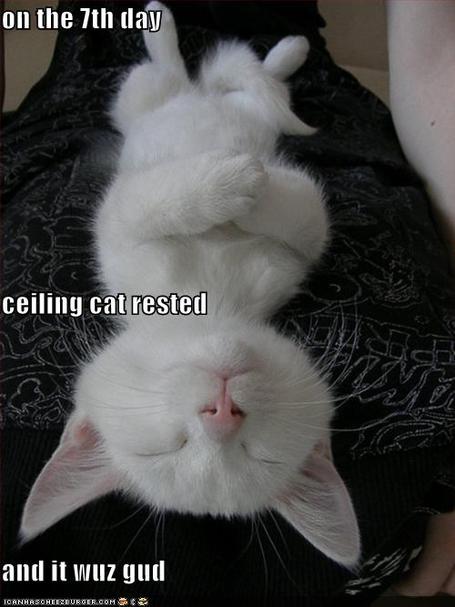 And on the seventh day, Bianco cat commanded his players to rest.

Friday night's 3-2 victory almost caused half of the crowd to go into cardiac arrest.  After a brilliant 7.1 innings by Pomeranz, it took everything Brett Huber had to shut down the Florida's bats in the bottom of the ninth to get his second save of the season.  Pomeranz struck out 9 and walked 2 while allowing an earned run on five hits.  All of the offense for the Rebels came early as they tagged Florida ace Alex Panteliodis for two runs in the first and one in the second.  In the first, Alex Yarbrough singled and stole second.  With two outs, Matt Smith hit a RBI double off of the wall in his first at bat in a week.  Zach Miller then stepped up and hit an RBI single that drove in Smith.  In the second, Kevin Mort executed a successful suicide squeeze to score Miles Hamblin who had reached third by way of a triple.

Saturday's 15-3 victory was nothing short of ridiculous.  After a Florida scored 2 in the top of the first, the Rebels answered with four in the bottom of the first.  It was all Rebels after that.  Fergie Ferg led the way at the plate by going 5-for-5 with four runs scored, and RBI, and a walk.  Matt Smith hit his fourth dinger of the year to go 2-4 with 3 RBIs.  Defensively, Aaron Barrett pitched six complete and allowed three runs on six hits with six walks.  He also struck out nine.

Sunday's 13-1 loss was the Rebels' fourth consecutive Sunday loss.  The Rebels fell to 19-6 overall and 4-2 in the SEC.  Four of the six losses have come on Sundays, and our only SEC losses have come on Sunday as well.  Starter Trent Rothlin went 2.2 innings and allowed 4 runs on 4 hits.  Matt Tracy pitched 1.2 and had an identical stat line as Rothlin.  Eric Callender got a taste of the action and allowed two runs in 2.1 innings pitched.  David Goforth was brought in to try to overcome his slump.  However, he allowed another homerun during his 1.1 innings.  Brett Huber finished up the game and allowed another two runs.  Offensively, our lone run came on an RBI groundout by Matt Smith.

Weekend thoughts... In my weekend preview, I made the statement that this was the series that would tell us where we were as a team.  After being there in person on Friday and watching CSS today, I know that we can play with anyone.  We can also decide to just not show up for the game.  Over the past four Sundays, we have been outscored 47-16.  Many of you are happy with taking the series, but we have to win the Sunday game in the regional in order to advance in the post season.  To compete in the SEC, we have to be able to sweep.  In just two weekends of SEC play, six other teams have already completed a sweep of another:  Arkansas, Auburn, LSU, South Carolina, Florida, and Vanderbilt.  Some of you are thrilled about this weekend series, but here is what a friend of mine had to say:

Great, we took a home series over a team that had a losing record three years ago and is coached by a guy in his third season. That’s exactly what we should do. Do I give Bianco credit for not losing the series? Yeah, I guess so. But should we be THAT impressed, or do the mad propz come from lowered expectations?

Am I making sense here?

We expected a down year this year, and so far we aren’t having one. But we shouldn’t ever be expecting a down year in the first place.

In three years O’Sullivan has taken his team from .500 to a team we’re thrilled to take the series from at home.

Then, he delivers his final punch to prove the point I've been trying to make to all of you since we started the Cup in 2008:

I’m happy we won, obviously, but I’m not ready to give Bianco credit yet. Get us to Omaha, and then I’ll give him credit for delivering with so many new and inexperienced players.

On Deck: @ Pearl against Mississippi State