Share All sharing options for: On Deck: Southern Mississippi

After a successful weekend trip to Lexington for the Diamond Rebels, they will once again board the bus and head to Pearl, MS for a showdown with the University of Southern Mississippi. 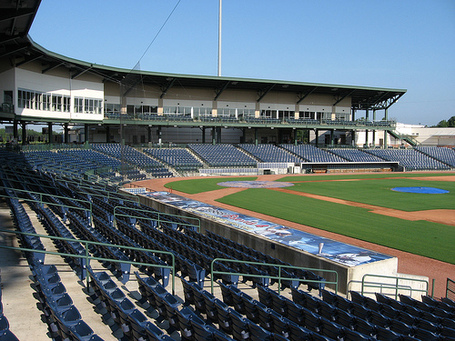 The Golden Eagles will travel to a baseball stadium with a larger seating capacity than their football stadium.

The annual meeting between Ole Miss and Southern Piss (lulz! See what I did there?)  is just a important as usual.  For Ole Miss, the Rebels are striving to keep this promising season headed in the right direction.  For USM, they're searching for their first "big" win on the season.  The Golden Eagles won last year's match-up in Pearl by a score of 6-4.

USM is coming off of a week in which they went 3-1 with the only loss coming in Friday's game to Louisiana Tech.  They are a perfect 5-0 in midweek games, and they have one of the better records in C-USA at 13-5.

Defensively, Todd McInnis leads the charge on the mound with a 1.95 ERA.  Luckily, we won't have to face him.  Instead, Senior LHP Jeff Stanley, who got the win against the Rebels in Pearl last season, will climb on the mound. He sports a 5.02 ERA, is 2-0 on the season, and has seen considerable action with 14.1 IP.  Opponents are hitting him at a .286 clip.  As a team, the Eagles are fielding at a decent .965 and are allowing 4.2 runs per game.

The Rebels come into the weekend having just gotten their first road series win at Kentucky since 2002.  Since One Man did a great job summing that up, you can check out his recap just down the page.  Taking the mound for the Rebels will be Sophomore LHP Matt Crouse.  Matt has a 2-0 record and 2.00 ERA on the season in 9.0 IP.  In this limited exposure, he has managed to strike out 10, walk 4, and opponents are hitting him at a paltry .176 average.