Middle Relief is a weekly segment recapping the midweek baseball action.  This week, the focus is on the two game stint with Austin Peay.

The Diamond Rebels proved me wrong by sweeping the Governors from Nashville by a total score of 24-6.  Big performances from unexpected sources got the Rebels some blow-out victories.  A must-read after the jump. 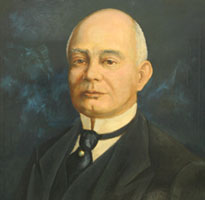 Austin Peay was governor of Tennessee from 1923-1927 and is the only TN Governor to die in office.

My preview on Tuesday focused mostly on the hot bats of Austin Peay, but it was the Rebel bats that kept pounding out the hits en route to big victories.  Picking up where he left off last season, Kevin Mort is tearing it up in midweek play.  He was 4-for-7 with a walk and 2 RBIs in the series.  Defensively, the series MVP was none other than Senior RHP Rory McKean (1-1) who pitched a career high 5.0 innings and allowed 1 ER on 7 hits.  He punched out 7.  His pitching set the tone for the series.

Tuesday Night saw the Rebels plate 14 runs and allow 4.  McKean's performance was listed above, and Jordan Cooper and Eric Callender pitched the rest of the way to only allow one unearned run.  Offensively, many Rebels crossed the plate.  Mort led the Tuesday night charge with a 3-for-4 performance.  Tim Ferguson went 3-for-5 with a longball, and LHP Matt Tracy hit a two run dinger to opposite field.  Six Rebels finished with multiple hits.  After not committing an error all weekend, the Rebel defense committed three on Tuesday.

Wednesday Night's offensive fireworks that led to a 10-2 victory were somewhat unexpected since APSU's starter Stephen Huff came in sporting a 1.42 ERA through 19 IP.  The Rebels got after him early by scoring 4 in the bottom of the first.  Two runs came on a Mike Snyder blooper to shallow left and another two on a Taylor Hightower single.  Those four runs were more than Huff had allowed all year.  Zach Miller continued his RBI campaign with three more, and Taylor Hashman and Miles Hamblin combined for three more themselves.  Both went 2-for-4 on the day.  Defensivley, Ole Miss committed another two errors.  Matt Crouse moved to 2-0 on the year by pitching 3.2 innings.  When he left the game due to pitch count, he had only allowed one earned run.  Sunday All-Star Trent Rothlin then entered the game and pitched 2.1 scoreless.  Surprisingly, he retired each batter that he faced.  Tanner Mathis (you read that right) had his first action on the mound and gave up 1 ER in 1.2 IP.  Brett Huber came in and closed out the game without allowing a run.

Fun with numbers: Wednesday's pitchers for Ole Miss combined for only 5 strikeouts.  Rory McKean had 7 by himself on Tuesday.  Ole Miss committed a disturbing 5 errors in two games.  In the two games, the Rebels only allowed 3 earned runs.  APSU left 21 runners on base while OM stranded 11 ducks on the pond.  The official attendance for Tuesday was listed as 5695.  I was there, and I think they left the scientific notation (x 10 to the -3) off.  David Phillips now leads the team with 15 strikeouts.  Rory's Tuesday performance brought his average down to 8.22.

On Deck: Louisville @ Ole Miss for a 3 game weekend series.