No time to read a full post about Rebel tennis?  We understand.  You're still getting over the fact that the Rebels erased a twenty-point half-time deficit to Alabama at the Tad Pad, the Saints won the Super Bowl, and President Obama gave his full support to the Colonel Reb Foundation.

Nevertheless, we do have a few notes on the netters.  All courtesy of the Corporate Headquarters.

Men face Old Foe Georgia in ITA Sweet Sixteen.  The Intercollegiate Tennis Association National Team Indoor Tournament is in Charlottesville, Virginia this year at the Boar's Head Sports Club.  I've actually been to said club, and it is frat.  Charlottesville, on the whole, is a top-notch town with a fun and classy looking downtown.  Our boys should have fun.  What promises to be less fun, though, is facing a tough conference rival in the Round of 16.  Georgia Tennis is the class of the SEC, so we will know a lot about how far our young players are progressing after this match.

Before that, though, is Troy.  The Trojans are, allegedly, undefeated.  I say "allegedly" for two reasons.  First, their schedule shows that they have played patsies in Alabama State and Georgia Southern.  However - as a segue - their schedule is not entirely reliable, I think.  You can see very clearly here that we think we are playing Troy on Monday, February 8 (or "today") at the Gillom Center.  However, screenshotted evidence documented below shows that Troy thinks otherwise. 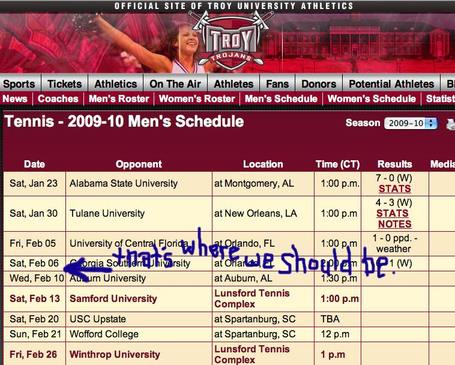 And how 'bout them wimmerns.  After losing a tough match at Clemson in ITA Qualifying, the women came back to Oxford for a tune-up against Murray State, whom they handled with ease.  A bit of a layoff is in store for them, as their next match comes on February 20 against Texas Tech in Oxford.