I got the luck of the draw in our position by position breakdown: defensive linemen and defensive backs.

These were by far the most well stocked areas on the team this year in recruiting. The Rebels nabbed six defensive linemen this year. There were six defensive backs who signed with the Rebels.

It was absolutely imperative that the Rebels get this many players however at these positions. Find out more after the jump about the defensive line additions.

The good news is that we have four players returning with loads of experience. The great news is we'll players getting experience throughout this next year to be ready to start in 2011.  As far as we know, all of these players should be academically qualified come August.

Bryon Bennett and Carlton Martin are the dynamic duo from Madison Central who led the team's defense all the way to the North Half State Championship game. MC ran into the mighty Tigers from South Panola and were defeated on the way to SP's 293rd title in the last 300 years.

Bennett and Martin have the size to play on the next level, and I think they have potential to improve when given the time to produce. I wouldn't look for them to immediately break into the d-line rotation but these are the guys coaches will be looking to next year to help keep a consistent front four at Ole Miss.

Carlos Thompson reminds me a little bit of Greg Hardy. Not in the "maybe he emo-rages and takes awkward photos of himself" kind of way. He's a lanky, tall, athletic-looking build kind of DE.

Thompson will need a little time to build on his frame but also to adapt to the speed of the SEC. I am mildly concerned about the talent gap he faced at Hollandale Simmons compared to the talent at the next level. BUT I think he needs a good year in the weight room to build up to maybe 235 or so and be ready to enter the rotation in 2011.

Wayne Dorsey could very much start at DE in the first game of the 2010 season. The Mississippi Gulf Coast Community College signee is tall and already looks the part of a starting defensive lineman in the SEC. Whether he has completely reached his potential is unknown.

It is possible Dorsey is considered a quick fix for the swath of DE's who departed in 2009. Coaches obviously have to be confident in his ability or at least think he can hang with the talent. He was rated as the #15 overall JUCO player in the country by Rivals, for what it's worth.

As this YouTube video shows, Dorsey uses his long arms to chop at the ball to cause fumbles or break forearms(audio: NSFW). The music behind Dorsey is prophetic in stating, "I'm a Star" roughly 39,382 times.

Much like Dorsey, Cameron Whigham has had the extra time since high school to work out and build himself up. Whigham was a greyshirt signee in this year's class. He was a top 100 DE coming out of Shiloh High School in suburban Atlanta in one of the most competitive regions in the state.

Whigham might be better suited for playing DT ultimately, if he wants to put on the weight. He stands around 6'3'' and weighs roughly 250 lbs. From scouting reports on the intrawebs, he can run a 4.7 40 yard dash. If he bulked up into the 280 or 290 range and only slowed to 4.9, he would be an absolute monster.

Right now, he seems like more of a project and will be someone the Rebels look to next year for production.

There's also a Scout.com report that Jones can run the 100m in 10.7 seconds. Seriously, that's a big, fast, burly 18 year old. Another good tidbit is that he wants to major is broadcast journalism, which is probably one of the easiest majors at Ole Miss(I would know, I did it and I can't read or write).

I think Jones should be shoved right into the d-line competition early on. He could have a higher ceiling than some of our other recruits and blossom early. From the looks of it, he could've gone to school anywhere, but he chose Ole Miss. Let's see what we can do. 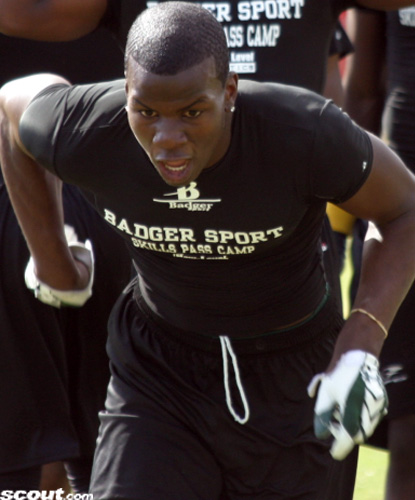 Delvin Jones work-out photo, he was actually running his 40 with a truck tied to him(slowed him to 5.7 seconds)