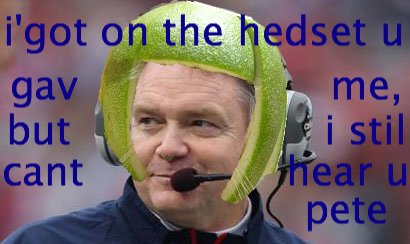 RECROOTIN' DALE!  smiles triumphantly from his office in the Indoor Practice Facility.  He lights a cigar.  He's never smoked one before, so it makes him a little light-headed.  He spins around in his office chair, varying the volume of his voice with each half-revolution, depending upon which direction he's facing.

The cell phone rings.  His ring tone is "The Joker" by the Steve Miller Band.  He sings along.

RD!:  I'm a hooter.  I'm a tooter.  I'm a badass 'crooter.  And Bobby Petrino got no oooone.  (He answers the phone with a salutation he thought up three weeks ago.)  RECROOTIN' DALE'S matching service; we've got more stars than NASA.

It's The Enemy of the Cup.

EotC:  Hi, Houston, this is [The Enemy of the Cup] from the Clarion-Ledger.  Just wanted to get your thoughts about this recruiting class y'all have put together.

RD!:  Let me tell you something about recruiting at Ole Miss, [EotC].  We killed 'em.  Just killed 'em.  You people and your newspaper have been talking about how State was - what was it y'all were saying? - oh yeah, DOMINATING  in-state recruiting.  Just wiping the floor with me and my boys up here.

EotC:  Well, I wouldn't necessarily characterize our coverage like that.

RD!:  Oh, why not, buddy?  Maybe because it turns out that was pretty darn stupid.  Oh, but I bet their gonna spread that fun between their could-been-Sun-Belt-all-stars, huh?  Hey, [EotC] why don't you tell your buddy Kyle to let them rednecks know that communism only works in theory!  Whoo!

EotC:  Okay, well, do you have any thoughts about any of the players you signed.

RD!:  And how about that Bobby Patino?

EotC:  That's not the name of the head coach at Arkansas, but I gather from context clues that ...

EotC:  Well, there's not doubt that their class was a bit of a disappointment.

RD!:  A bit?  You know how that show "Dancing with the stars" has primarily people who are not really very big stars.  How most of the folks on that show are, like, not, in fact, stars?  Well ...

EotC:  Coach, you're a bit more vulgar tonight than usual.  Have you been drinking?

RD!:  Damn Mullen is a SOCIALIST!  I'm gonna Byrne Greg's house down!  (He leans back in his chair and rests his eyes for a moment.  Silence envelopes the office).

While he RD! sleeps two mysterious figures sneak into his office through an air condition duct.  The sleek along the dark walls, but pass through the moonbeams shooting in through the second-story window, revealing them to be HOWIE MORGAN and BRIAN FERGUSON of the Save Colonel Reb Foundation.

BF:  Howie, this is teh best idea you've had ever.  Hipnotizing Coach Nutt while he sleeps into loving Colonel Reb - your to smart.

HM:  (In a menacingly deep whisper) Of course, Brian.  Before long, he too will join our Facebook group.  And, then, it will only be a matter of time before we can finally topple Khayat, Boone, Jones, and Obama.  Now, give me the pre-recorded audio tape.  Not the one I used to teach you to speak, but the one that repeats "Colonel Reb is an important tradition."

BF:  Well, Im sorry, Howie but I didn't have enough room in my pockets after I filled them up with my "For Pete's Sake Bring Back Colonel Reb" stickers.

Howie plays the trumpet opening to "From Dixie with Love," and Brian accompanies on his kazoo.  They play through the song no fewer than seven dozen times.  They take a break.  Brian drinks a juice box.  It's almost one o'clock.  RD! has not stirred.

BF:  So, Howie, what do you suppose we'll do tomorrow night?

Howie stares intently at triumphant, sleeping RECROOTIN' DALE and plays slowly and meaningfully the score from "Pinky and the Brain."