May I modestly propose a certain Brobdingnagian?

Share All sharing options for: May I modestly propose a certain Brobdingnagian?

Sincere congratulations to the forces of evil, who have conspired within their collective intelligence to raid and destroy all of our precious traditions.  May you suffer the same fate awaiting Dan Marino.  But, I'm prepared to let bygones be bygones.  It's a new day.  And soon there will be a student-led effort to craft a new on-field mascot for the Rebels.  We here at the Cup have a suggestion concerning which student ought to be leading that effort, which we predict might be accepted without objection: 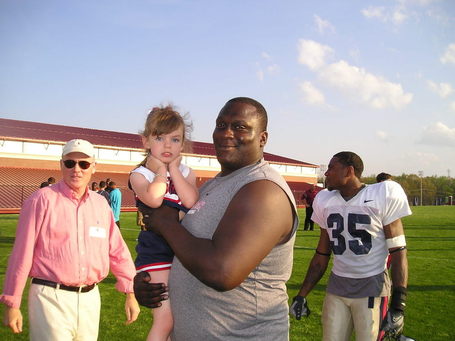 That's right - J-Rel.  Shown here getting to know alumni and their children for whom a mascot is, allegedly, very important.

I am actually going to send this letter to the current and forthcoming presidents of the student body, as well as, to Sovent Taylor, who runs the Cardinal Club.  You may send something similar, if you so choose.

To Whom It May Concern:

As a former undergraduate and current law student, I have spent the last seven years enjoying a variety of Rebel athletics.  I am excited that students have taken on the responsibility of crafting a new on-field mascot for the university.  School spirit should be, primarily, student-led, and I look forward to their choice.

While I will not propose any ideas for the mascot, I would like to nominate a person to lead the committee:  Jerrell Powe.  Jerrell is one of the most popular athletes at the university.  He is a native Mississippian.  He, also experienced the most arduous admissions process since James Meredith.  His endurance is a clear representation of his commitment to Ole Miss.

Perhaps no memory from the past two football seasons stands out to me more than when I went to Gainesville and watched the Rebels defeat the eventual national champions, the Florida Gators.  Many moments from that day were sweet.  Not least among them was watching Mr. Powe lead the band in a rousing rendition of "From Dixie with Love."  It was a truly special moment.

As an African-American who grew up in Mississippi, Jerrell has keen insight into the emotions that surround our school's symbolism.  As an athlete who is popular with alumni, his voice and opinion will lend great credibility to the eventual choice.  And as a very large man, he can intimidate all who disagree with him.

Please consider approaching this determined and well-loved Rebel about being a part of your committee.