EDIT:  I closed comments on this post.  I wrote it, so I get the last word.  (My website.  My rules.  Deal with it.)  Symbols are a strong emotional part of Southern Culture.  This little satire reflects my opinion that some of the symbols that I loved growing up are not practically conducive to the academic and athletic missions of the university.  This is my website, so I get to express my opinion on it.  And today, I'm going to express the final opinion.  Hugs and kisses, Ivory 2/22/10

After weeks of debate and discussion, the Col Reb Foundation and the Ole Miss Athletic Department have reached a historic compromise concerning the disputed and controversial on-field mascot for the university, potentially scuttling the need for the upcoming referendum on the matter.

"We just wanted to save the most fundamental traditions of Ole Miss.  After weeks of negotiations, we think we have come to something that everyone can get behind," Hannah Loy, student chair of the Colonel Reb Foundation, said.

"We decided that we wanted to move forward from Colonel Reb, let go of some of the symbols that have caused people to be offended and not feel like a part of the Ole Miss family.  At the same time, we wanted to include, as much as possible, all those people who still hold onto those symbols," Sovent Taylor, athletic department staff member and advisor to the Cardinal Club, said.

Red Cup Rebellion has obtained an initial sketch of their compromise mascot. 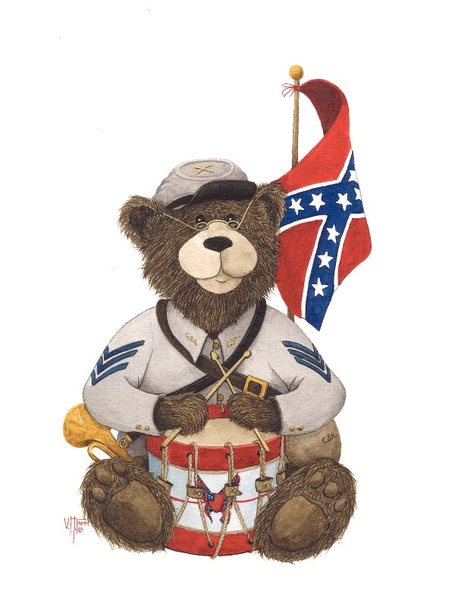 "The fact that it's a bear and not a cartoon plantation owner totally obscures the racist battle flag and clear allegiance to a treasonous and slave-holding republic that existed over 150 years ago," Taylor said.

A press release obtained by Red Cup Rebellion indicates that the proposed mascot was reached by melding the Mississippi black bear with traditional Confederate regalia.  "Look, I can get behind a bear.  You can't blame this nation's history of slavery, segregation, and discrimination on a cute little bear.  So, I'll pretend that the gray suit is a coincidence.  Besides, he can't take that flag in the stadium with him, anyway," Taylor said.

Associated Student Body President Artair Rogers indicated that the referendum will go forward as planned.  "This is not the only idea out there, so we want to move forward with the referendum and the student-led effort.  Who knows, perhaps there is some other Rebel-themed animal or pop culture reference out there with a groundswell of student support.  When people tell me that it would be better for everyone to just get behind Seggy Bear, I think of the potential disadvantages of such a course and conclude that it's a trap."

"Seggy Bear," is also, apparently, a compromise name for the proposed mascot.  According to Loy, it will be "officially but unofficially" short for "Segregation the Bear."

Officials at the university do not in any way expect that this decision will be revisited in a short period of time, resulting in just another incidence of national embarrassment for the university and its controversial racial history.  "And even if it does," Taylor retorted, "I mean, we've gotten pretty used to the 'tradition controversy.'  Infighting about the cultural meaning of offensive symbols is kind of a tradition all by itself here."