This is the third and final in a series of position breakdowns previewing the 2010 season of Ole Miss baseball.  In the five days remaining before the first pitch, One Man to Beat and I will do our best to acquaint you with our team.  Today, I will discuss the Rebel pitchers. 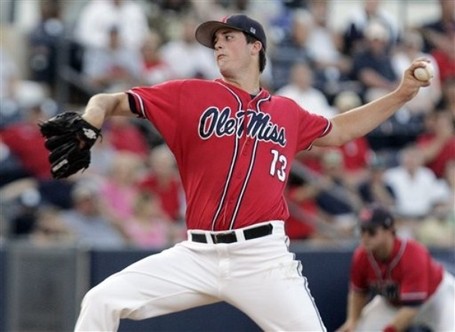 I am the best.

In 2009, the pitching staff was the backbone of the team and had a stellar 4.06 ERA.  Four pitchers were taken in the draft, and Jake Morgan was lost to an off-season injury.  In 2010, only one weekend starter returns to anchor the rotation.

Friday night: Junior LHP Drew Pomeranz made his debut his freshman year by striking out 81 and walking 30 in 71.1 innings of work.  He was a Freshman All-America selection and Freshman All-SEC.  In his sophomore campaign, he started 16 games and finished with an 8-4 record and 3.40 ERA.  He struck out 124 while walking 37.  He had two complete games on the season, the most memorable being the NCAA Regional Championship game against Western Kentucky when he had pitched 8.0 innings just two days before.  He allowed just 2 hits while walking 1 and striking out 16.  One run was unearned.  During the summer of 2009, he pitched Team USA to a world championship.  Drew racked up 48 K's and a 1.75 ERA en route to a 4-1 record.

What can we expect of Drew in 2010?  Besides a lot of time a the Library, he should have an All-American like season for the Rebels.  The one area in which Pom needs to improve: holding runners.  There's no excuse for a left handed pitcher to let runners steal at will.  Nonetheless, he'll be the all-star of the weekend rotation, and could finish with a stellar ERA.  Every Ole Miss fan should be happy if he finishes with 11 wins and a sub 3 ERA.

Saturday:  Junior RHP Trent Rothlin is a new Rebel who came over from Walters State Community College in Morristown, Tennessee.  Last season, he struck out 65 and walked 29 in 58.1 innings, and he finished the season with a 7-1 record.

What can we expect of Trent in 2010? The stats from Junior College are not that impressive, and it would be tough to expect a lot out of Rothlin.  However, Bianco likes what he saw out of Rothlin during the fall.  Personally, I'm hoping for someone who can keep us in the game, allow our defense to work, and not make too many bad decisions.

Sunday:  Senior RHP Aaron Barrett started last season in the Friday night slot for the Rebels.  He started four games before moving to a relief role.  He showed he had good stuff, but he lacked the control necessary to keep it together.  Later in the season, Bianco started using him an inning at a time, and that proved more effective.  He finished 2009 with an 8.70 ERA and 0-1 record in 30.0 innings of work.  He struck out 33 and walked 13.

What can we expect of Aaron in 2010?  All of the optimism in me could hope for a Bukvich like senior year for Barrett.  It was obvious that he has the physical build and tools to be successful.  Let's pray that he keeps his ERA under 4.50 in SEC play.

Closer:  Redshirt sophomore flamethrower and RHP David Goforth had some success his freshman season.  He turned out a 2.80 ERA, had 3 saves, and struck out 36 in 35.1 IP.  Most thought that he would again be in the middle-relief role this year, but an off-season injury to Jake Morgan has forced Goforth to grow up quickly.

What can we expect of David in 2010? I would expect a surprisingly strong season from David.  He was good at times last year, but he needs to be good all the time this year.  I would hate for the closing role to be reminiscent of the 2007 Satterwhite/Bittle debacle.

Others:  Junior LHP Matt Tracy only saw 5.0 innings of work last season, but Bianco was impressed with his consistency and went as far as saying that he was the most consistent in the fall.  Sophomore LHP Kyle Barbeck saw limited action last season in 18.1 IP and notched a 5.89 ERA.