Share All sharing options for: TLV #120 - Ole Miss Should Roll The Dice

Whiskey Wednesday awoke from a post Egg Bowl haze littered with regrettable decisions hibernation to pen this edition of RCR via TLV. It's a tough, yet frank look at our situation as a program and the state of affairs regarding our football coaches and their potential. Click the image for the full PDF, or click the jump for the text. 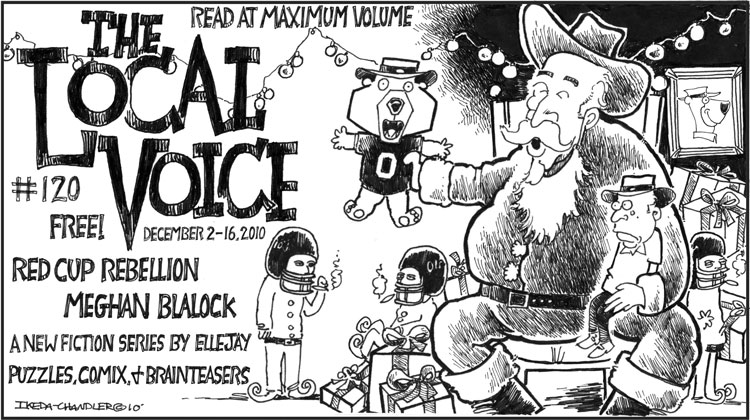 Here we stand, a week removed from the second humiliating Egg Bowl loss in two years, marking the end of a second straight season in which even our more modest expectations were dashed by underperformance and questionable coaching; shoulders shrugged, highball glasses half-empty, and ruminations of "well, now what" filling up our consciousness.

"Perhaps we Rebels have become spoiled, gotten greedy, even," some may propose. "We shouldn't expect back-to-back-to-back bowls and respectable records against our SEC opponents. We're Ole Miss. We're just not able to take that next step."

In the long run, these defeatist attitudes that have done nothing but held us back, and it's time that we get out our bud-nippers, and well, just put a stop to them.

Who truly believes, or can even tolerate the idea, that Mississippi State and Vanderbilt are better programs than Ole Miss? Do you not think the Rebels can, at the very least, compete athletically with Alabama and LSU year-in and year-out? Do you not think that high school players want to move to and play in Oxford, or that we cannot afford coaching able and willing to achieve even the most realistic of goals? We at the Cup are the very first to admit that we don't have the resources or momentum to be an Alabama, a Texas, an Ohio State, or any of the few gigantic football programs in America; but we assuredly have more than the Washington States, Indianas, and Iowa States of the college football universe. We are, undeniably, part of the game's large "middle class" of football programs. We've had success in the past, just as we've had our failures. We've put players in the NFL, we've won conference titles, and we've been in and out of the Associated Press polls since their inception. We're no doormat, just as we're not a worldbeater. However: by my count, 43 different teams have been to BCS bowls since the inception of the BCS in 98-99. Teams like Colorado, West Virginia, Mizzou, and Kansas have been national title contenders deep into the season. How audacious is it to believe that, once every decade or so, Ole Miss could join those ranks?

In major college football, the old belief was that there aren't quick fixes. Building a great team takes time and patience. Tell that to Alabama, Arkansas, Auburn, and now MSU. These programs have all freed themselves from coaching situations ranging from erratic (Nutt), to stale (Tuberville), to downright god-awful (Croom). And every one of these coaching moves has undoubtedly paid off. Will these coaches win forever? Of course not. But are the winning now? Unfortunately for us, they all are. And for every feel-good story like Mike Stoops, whose Arizona Wildcats are winning big after years of mediocrity, it seems like there are two more programs who are rolling the dice and winning with new hires.

So roll the dice we must. Programs like ours are forced to gamble to keep up, on both the micro and macro levels. Gamble on 4th and ten... gamble on hiring a fiery young coach... gamble with a cornerback blitz... gamble by reaching deep into the coffers to buy a proven head coach.

Am I advocating the dismissal of Nutt? Well... sort of. Since hiring Nutt, Ole Miss has been forced to accommodate Nutt; to pony up extra cash to stifle his flirtations with other schools; to blindly accept his sometimes-nonsensical personnel decisions. With a 4-8 season behind us, leaving Nutt stammering in disbelief, it's time to enforce accountability. There is no reason to tolerate a decision to retain the bulk of the defensive coaching staff. Recruiting, cohesion, and loyalty be damned, this Rebel defense was the worst that any of us have seen, and with Nix tossing around excuses like opposing quarterbacks tossed touchdowns, it's increasingly clear that he and his men have run out of ideas.