Year-end Statistical Comparisons; How Different Was This Team?

Share All sharing options for: Year-end Statistical Comparisons; How Different Was This Team?

The dust has settled and another disappointing chapter of Rebel football is in the books whether we like it or not. What took place this season was, frankly, what hardly anyone expected, Rebel or otherwise. An easy schedule, a veteran front seven on defense, and a dynamic playmaking quarterback were going to be the recipe to this team's success as the Rebs were surely to, at least, make it to a third consecutive bowl game, right?

Then Jacksonville State happened and everything we thought was this season fell apart in an instant.

I'd rather not go deep into the specifics, lest I literally punch a hole in anything within arms reach (I'M LOOKIN' AT YOU DESK CALENDAR), but suffice it to say that the past four months sucked. How much did they suck? Well, masochistically, I decided to look at the numbers and see how exactly one can quantify the suckitude that was the 2010 Ole Miss Rebels.

Based on personal inclination, I picked seven metrics by which to judge both the offense and defense of this team: points, rushing yards per game, passing yards per game, total yards per game, third down conversions, touchdowns, and red zone touchdown percentage. All are statistics which demonstrate pretty basic tenants of successful football. If you can score touchdowns, run, pass, convert third downs, and score in the red zone, then you're golden. If you can't stop your opponent from doing the aforementioned, then you're not. Simple enough, right?

I compared the Rebels' numbers in these metrics in 2009 and 2010 before noting the difference percentage of difference between the two. I shouldn't really have to explain it any further than that. Give it a look. 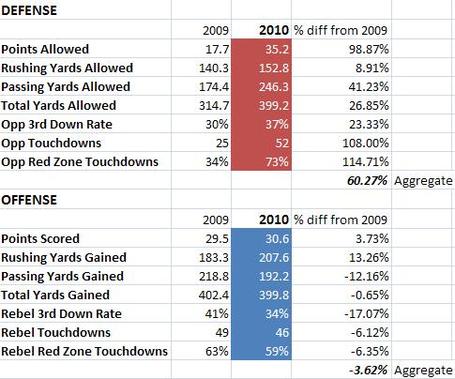 I know statistics don't necessarily work this way, as I am sure one of you will not fail to point out to me, but I decided to take an aggregation of the deltas to sort of get an idea of just how different these two units were from their 2009 counterparts overall. If such a method were to be trusted, one could reasonably suggest that the 2010 Rebel defense was a whopping sixty(sixty!) percent worse than the 2009 unit. The 2010 offense, though, only performed at a level that was 3.6% worse than the 2009 unit which, when considering the loss of Dexter McCluster, Shay Hodge, and half of a starting offensive line, is actually pretty satisfying. The 2010 Rebels could score points in numbers which weren't that far off from the 2009 Rebels, a revelation which does, admittedly, temper my current disgust with one Houston Dale Nutt, albeit not by very much.

I think a lot of this offensive success can be attributed to the gutsy mobility of Jeremiah Masoli and the all-purpose badassery of Brandon Bolden. With a young interior line and a McClusterless offense, the Rebels still put more points on the board and yards on the ground this season than last. New receivers and linemen emerged as legitimate offensive impact players, most notably Patrick Junen, Melvin Harris, and Ja-mes Logan, because Masoli's mobility and uncanny ability to stretch a play for a few seconds longer than it should gave these guys an opportunity to make plays of their own and succeed, and Bolden's prowess as a rusher gave opponents a legitimate rushing threat to concern themselves with.

So I give the offense a tip of my hat. While there were some very frustrating moments, the Rebels took a quarterback fresh into the system, a career backup halfback, and a bunch of jabronis on the offensive line and actually produced on the field. Well done, Rebs and, truthfully, well done coach Nutt.

The defense on the other hand... Let's just say that I'm pretty fucking astonished that Tyrone Nix still has a job.