Free Admission to Ole Miss vs. ETSU This Saturday

Share All sharing options for: Free Admission to Ole Miss vs. ETSU This Saturday

Tomorrow will be Saturday, December 19. Most students will have already gone home, joyous to have a holiday break after their first semester finals for the academic year, while most Oxonians will be bundled in their homes watching reruns of Merry Christmas Charlie Brown while sipping on room-temperature scotch. (You wanna warm up in an instant? That'll do it) It's not a good time for college basketball in general, a problem which is only exacerbated for Rebel basketball which will forever be at the mercy of basketball not being a widely celebrated sport in the small towns of the Deep South. So, it's fair to suggest that tomorrow night's Rebel matchup against Eastern Tennessee State University (in itself another hindrance to attendance) will be sparsely attended.

That's, honestly, an entirely understandable situation which is why admission to any- and everybody who wants to partake in what will hopefully be a drubbing of a foe from an inferior conference will be entirely free tomorrow. No strings are attached, just show up and enjoy yourselves if you can.

And, while we're on the topic of Rebel fans enjoying themselves at Ole Miss basketball games, check out the image that OleMissSports.com has used to promote the free admission tomorrow. I doubt anything can demonstrate the problem of establishing a large and enduring student support base for Rebel basketball any better. 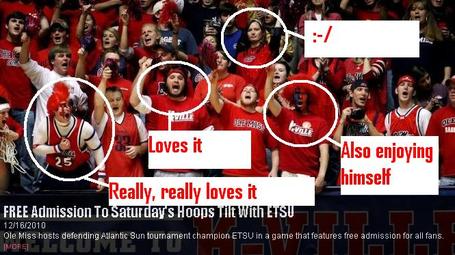