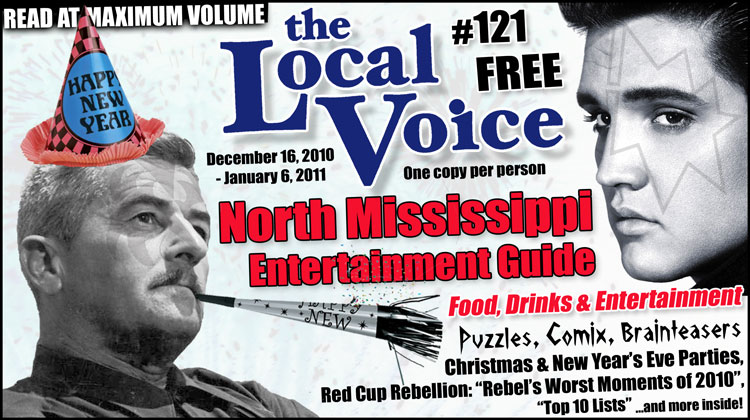 Take a horrible, soul-crushing walk down memory lane with this edition of Red Cup Rebellion via The Local Voice! Click the image for the full PDF or click the jump to read something which will likely make you smash whatever device you're reading this on. (Looks like somebody's getting a new iPad for Christmas!)

The Ten Worst Moments in Ole Miss Athletics of 2010

As masochists, we at Red Cup Rebellion love reveling in, even celebrating in, the moments which truly make Ole Miss Rebel athletics the most unique set of programs in the entire NCAA. That means, of course, taking a hard glance in the mirror and figuring out exactly what went wrong, what caused us to shake our heads in typically defeatist fashion, and what caused us to sardonically albeit proudly proclaim that, yes, "we are" in fact "Ole Miss."

So, without any further fuss on the matter, we at the Cup present to you the ten absolute worst, albeit most microcsomic, Ole Miss Rebel sports moments of 2010. No, this won't be easy to stomach, but even Bill Faulkner himself spoke of an eternal albeit hopeless desire to prevail so, simply, make like you do in any of your difficult times and falsely convince yourself that this isn't as bad as it seems. Alright? Good. Here goes:

10. We Rebels were forced to give a damn about our (quite good) tennis program due to the shortcomings of our other sports. Billy Chadwick, you sir, deserve a raise. You're running a veritable UN of a team - successfully giving cause for the Dutch and Germans to amicably mingle - and absolutely dominating the SEC West year after year by recruiting the best players Western Europe and South Africa have to offer. Let's be honest here; most of y'all don't really care that much for tennis. You just love the idea of an Ole Miss team that plasters Mississippi State and LSU on the reg (what is it, like nine years in a row now for each?) so you're totally fine with Coach Chadwick and Company doing whatever it is that they do. Now, if only a few other of our non-major sports can dazzle, we'd be golden. Rifle team, we're looking at you.

9.  Jevan Snead declaring for the Draft and Raymond Cotton being a baby and transferring. That set us up beautifully for number two. And of course we don't take anything we've said about Raymond Cotton back, nor should we ever. That guy turned down a golden opportunity to, um, lose to Vanderbilt or something.

8.  Terrico White declaring for the NBA Draft right after showing everyone just how good of a basketballer he can be when he decides to actually, you know, play hard and stuff. Terrico dominated his NIT opponents because he knew NBA scouts would be watching. Had he played against Memphis and TX Tech in the same fashion he played against our SEC oppoenents, we wouldn't have been worrying about the NIT in the first place. Oh, and then he broke his foot like the first week in his NBA career. KARMA IS REAL, TERRICO.

7.  Barely getting into a regional and losing at the hands of UVA, again, despite having the best pitcher in all of college baseball. Drew Pomeranz will eventually win an alumni baseball game at Ole Miss where he strikes out 27 of our most promising prospects and then buys everyone pizza and ice cream afterwards.

6.  Realizing one week after the Egg Bowl that Tyrone Nix, despite "coaching" the worst Ole Miss defense of perhaps all time, still has a job. Oh wait, a month later? Yep, still employed. But hey, he did secure a commitment from a three star cornerback and some junior college prospects. That'll be equivalent to sticking chewed gum into a crack at the Hoover Dam. Way to give it your all, Ty.

5.  NIT FiNaL fOuR y'AlL!1 Another pontially promising basketball season in a weak SEC West flopped at the hands of poor play and dumb coaching... again. Even more exciting and surprising about our basketball posteason was that Andy Kennedy didn't, during the NIT finals, get into it with another cab driver in a city where cabbies are known for being incredibly aggressive and terrible at driving. He is maturing, y'all, which should get him another season or two at the helm.

4.  The intra-Ole Miss bitchfest that was the Ole Miss mascot selection process. TRADITION VS. PC/LIBERAL DAN JONES. This is actually a featherweight bout that nearly no one took notice of nationally, though Col. Reb proponents would have you believe otherwise. We argued and moaned over something that didn't matter and ended up making asses of ourselves in such a uniquely Rebel fashion.

2.  Suffering through the media's abuse after the Jeremiah Masoli transfer, only to reap a whopping four wins out of the guy. We still love you, Jeremiah. We hope being a park ranger works out for you.

1.  Losing to State in the Egg Bowl in Oxford. Dan Mullen needs to leave Starkville. My God, are Mississippi State fans ever annoying? But, until we can actually beat their asses like we're supposed to, we deserve all of the poorly spelled, awkwardly worded smack talk they can dish out.

Here's to a better 2011, folks! Let's hope for the best and drink ourselves out of the worst. Hotty Toddy and Happy New Year!