All you need to know about Wednesday’s Ole Miss juco signees | Veazey
Kyle Veazey's got the run-down on all of the junior college players the Rebels inked yesterday on his blog. Signed were DB Ivan Nicholas whose brother apparently plays in the NFL (who?), DT Gilbert Pena who is an absolutely frightening giant of a man who should start right away on the defensive line, DB Wesley Pendleton who was a star at Natchez High School a few years back, and QB Zack Stoudt who we've already made fun of and written off as a clipboard holder... We're kinda mean to strangers sometimes.

In Gilbert Pena, Ole Miss has a signee with an interesting background | More Veaze
Dennis Orlando, the juco head coach of the aforementioned Ivan Nicholas and Gilbert Pena, recounted Pena's difficult background to Kyle Veazey yesterday. Now, I know what some of you Clarion Ledger readers are thinking, "oh, great, another THUG Masoli type with a 'background' of weed smokin' and sodomy RIGHT?!!?"

No. Not at all. Pena was likely to have played football straight out of high school, but couldn't. His mother was diagnosed with cancer around the time of his graduation so, instead of going to college, Pena went straight to work and did so for three-and-a-half years so that he could help take care of his family. His mother's cancer, thankfully, went into remission at that point, which allowed Pena to enroll in junior college so that he could, hopefully, eventually play big time college ball. I'm pretty thankful to have this guy, not only because he's a mountain of a defensive tackle, but because he's shown that he's responsible and mature enough to be a real asset to any of the programs that offered him a scholarship.

This story, though, didn't keep troll-rageous State and Arkansas fans, as well as unaware and inarticulate Rebel fans, off of Veazey's blog with comments like

He's in the peepul heppin bidnis too! Nuttsy baby will be happy to know that

Yogi Bear told Masoli he could get him a job at the park, so Yogi, BooBoo, an Masoli could steal all the picnic baskets together.

(what this has to do with Gilbert Pena, I don't know) and

Fire Dave Rader !!!!!! Hire Todd Dodge !!!!!! Teach our defensive backs how to cover someone. Did you ever see a catch where we were within five yards of the receiver ? Get rid of Sawyer, Temple Brown Ingram. Find somebody who caqn play !!!

Hire Todd Dodge? The guy who was fired at North Texas this year? That Todd Dodge? Sheesh, I really love to hate Clarion Ledger commenters.

2010 CFN All-Sophomore Defense & Spec. Teams | Scout.com
Bryson Rose is a sophomore all-American kicker. You know what that means, don't you? LOU GROZA AWARD WINNER (who misses the two most important field goals of his career) IN TWO YEARS! OLE MISS KICKING DYNASTY, Y'ALL!

"… thanks to all the fans for a great season of support. I know this season wasn’t all we had hoped for but it was a great ride."

No, Jeremiah, thank you. When we took the gamble of recruiting you to Oxford, all we heard from our detractors was how you were a washed up "thug", a troublemaker who wouldn't be able to compete within the rigors of the Southeastern conference. Although we couldn't muster the defensive fortitude or the offensive playcalling to put a consistent product on the field, you played like a champion on every down. You had every right to bitch at your coaches, slap around your receivers, throw your helmet in frustration, and all of that stuff primadonna "thug" players do; but you didn't. You simply played hard, put some points on the board, and fought for a team and coaches who, frankly, didn't deserve you at times. I'm elated to have had you associated with my football team, and I'm saddened to think that I'll have only seen one year of you wearing the red and blue.

Poor start to the season dooms Rebels | ESPN
All you need to know about Ole Miss football since like forever can best be summed up right here with this little bit of clarity from ESPN's Chris Low.

In the SEC, there's no such thing as logical expectations.

Yeah, and at Ole Miss, it's even worse.

Also, ESPN is running this graphic on the front of their college football section, a graphic which proves undoubtedly that it is 100% impossible to take a photograph of Houston Nutt which doens't somehow look strange. It's like sneezing with your eyes open or signing a legitimate quarterback prospect to sign with Ole Miss out of high school; it just cannot be done. See: 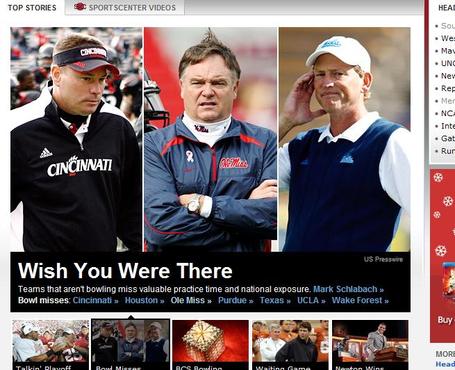 One thing I have to do to remind myself that "this shit just happens sometime," is remember that Cincinnati and Texas, teams which went to BCS bowls last year the latter having lost to Alabama during the National Championship Game, had seasons which were almost on par with our terrible season. Ups and downs, strikes and gutters.

Memphis quarterback Cannon Smith Arrested | ESPN
Guns, pills, and holla got the best of Cannon Smith, again. Hey, remember when we offered the guy a scholarhsip so his dad would build a big new building on campus and then he was arrested for dealing extasy and we stopped recruiting him causing him to sign with Da U but his dad built the building (FedEx Academic Support Center) anyway? That was a pretty awesome move on our part.