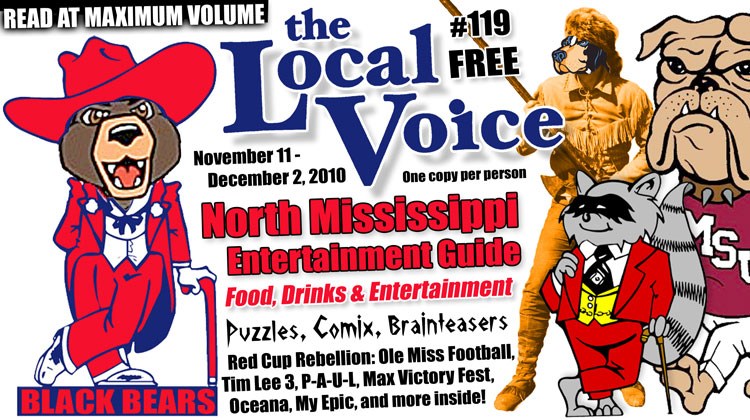 Some would call us Rebels "spoiled" or even "naïve" to even be contemplating such a possibility but, with four wins behind us and three games to come, Houston Nutt and his football team should certainly be driven towards the respectable and simple goal of bowl eligibility.

For the uninitiated, that means six wins on the season record or, in more dramatic terms, two wins over the next three weeks. A tough bill to foot? You betcha. But it's hardly impossible. Starting Saturday, the Rebels will need a more consistent offensive output, an opportunistic defense, continually solid special teams, and more than a handful of good luck to begin the push towards a bowl but, why not, We're optimistic. Here's who the Rebels will be facing and what they'll need to do to better their opposition.

First is Tennessee. New head coach Derek Dooley is, by all accounts, a respectable guy who does know his football. Unfortunately, the wrath of a Fulmer scorned mixed with the meddling idiocy of the Lane Kiffin/Ed Orgeron jackass brigade have really crippled a program which, not very long ago, was one of the SEC's most powerful. If we Rebels think we've got it bad, keep in mind that folks in the Volunteer State are legitimately wondering if, not when, they'll win a game in conference. Their offense is, mostly, anemic and their defense has underwhelmed mightily against SEC foes. Even in the once intimidating confines of Neyland Stadium, the Volunteers have struggled. The fewest points they've given up to an SEC opponent at home this season is 31. I volunteer (swidt?) that the Rebels can indeed score 31 on the Vols, if not more. This game's outcome truly hinges on the eye-poppingly awful Rebel defense. Even though Tennessee averages a meager 15-points-per-game in conference, they're certainly capable enough of scoring on us. It will take an excellent effort from the away team, but if the Rebels play smart and limit their mistakes, they'll come down from Rocky Top with a victory.

And then it's on to LSU. Between Les Miles and Houston Nutt, there will be enough of a sanity vacuum in Death Valley to render all of those watching temporarily illiterate and deranged. LSU certainly is a top ten type of team but, as Houston Nutt has shown, that hardly matters, having defeated ranked LSU squads with unranked Arkansas and Ole Miss squads for three consecutive seasons now. Will it happen again this season? That's not exactly likely, which actually means it's quite likely. We won't predict a Rebel victory, and it is games like these that make us happy to abstain from sports gambling but, whatever the outcome, we can guarantee that it will be an incredibly interesting performance.

So So it seems that, just as the Magnolia State's sports gods would have it, the game that would most likely determine our bowl eligibility is the Egg Bowl. Oh sure, they beat us last year in an embarrassing fashion, and they are currently ranked in the various college football polls for the first time since you got rid of your AOL.com email address, but of the games remaining on our schedule this is the one about which we should be most optimistic. If you've guffawed at this wild assertion that being on the cusp of bowl eligibility headed into this game might somehow be a good thing, ponder this: which aspect of the Ole Miss defense is our worst? If you said defending the pass, you're not an idiot. Which aspect of Mississippi State's offense is their worst? If you said offending the pass, then you have a strange understanding of the word "offending," but we get where you're going with it. Mississippi State's signal caller Chris Relf cannot throw the ball.

Okay, technically he "can" but, when he does, images of Great Depression era football or potato cannons come to mind. As far as the forward pass is concerned, Relf is easily the worst in the Southeastern Conference.

Putting aside the Bulldog's game against Memphis, which saw State pass for 372 yards against, quite possibly, the worst secondary in the country, State averages just 138 yards a game through the air. That's fewer yards per game than most high schools would average. Of course, this is by design as Dan Mullen isn't stupid enough to do something drastic like "ask his quarterbacks to throw," but this does mean that our defensive strengths - a term we use loosely here - could play into our advantage.

Oh, and there's also the fact that State hasn't won in Oxford since 1998. So hell yes there is a chance we could beat a much improved Mississippi State squad. And just imagine if that meant us getting to bowl eligibility at 6-6 and keeping them at 7-5; wouldn't that be incredibly fulfilling? In a "terrible" year for Ole Miss football and a "fantastic" year for State, we could conceivably end up with the same record at the end of the year after bowls.

Ah, but we've digressed. If we're to become bowl eligible, it starts this weekend with the Rebels trip to Rocky Top to face Tennessee. Hotty Toddy and beat the Vols!