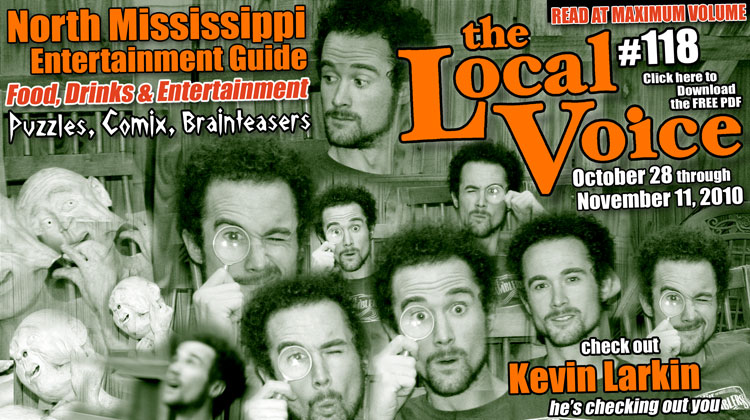 Click the image to download the PDF or just jump on it to get to the Cup's column. Once again, we've gone with Halloween costume ideas.

Once again, Red Cup Rebellion via The Local Voice decides to help you, the faithful Rebel and Oxonian
who, holding this here paper while delightedly shoving a Big Bad Breakfast cathead into your gaping
maw, has suddenly realized that you have nary a costume for this weekend’s festivities.

You’re embarrassed, and enduring a bit of self-loathing; you’ve got a costume contest, with prizes on the
line, to go to, but you were too busy drinking in your living room and watching Dancing With The Stars to
remember.

So woe is you? Hardly. Panic stricken though you may be, reader, worry not, for we pseudo-anonymous
bloggeurs of an equally rebellions persuasion know exactly how to entertain, provoke, and delight your
hosts and fellow party-goers with timely and only slightly appropriate Ole Miss themed costumes. No, we
won’t do all of the costuming work for you – we just don’t care that much – but we can provide you with
some excellent suggestions or concepts which should point you in the winning direction.

The Ole Miss Defense - Talk to your friends about how cool your costume is going to be in advance.
Get folks from all over to collaborate your costume’s awesomeness. Show up to the party not wearing a
costume at all.

6'10", 400 pound Offensive Lineman Terrell Brown – Does anyone remember that scene from the
Little Rascals movie that came out in the 1990’s or so when the Rascals tried to get a loan, so they
stacked themselves on one another in some elaborate meta-piggy back, wore big baggy, adult clothes
and walked into a bank? And almost got away with it? Yeah, do that, but with some of your obese friends.

Mike Bianco - Talk about how this is the best costume you have ever had, just as you do every year.
Convince everyone that this year's costume is of an even higher quality than in years past. Show up
looking great, but wearing a costume which isn’t very different from anything you’ve really ever worn, and
make sure the whole thing falls apart by the end of the evening.

Jeremiah Masoli - Carry around a laptop, on which is written "Property of someone other than Jeremiah
Masoli." Go to Starkville wearing this and make literally thousands of new friends who find your humor
original, engaging, and deep.

Cameron Newton – Carry around a similarly styled laptop and accompany Jeremiah Masoli to Starkville.
It doesn’t matter what their reaction to you will be, because it will be childish and hypocritical.

A Grouchy Tradition Crusader - Temporarily abandon your allegiance to the university. Wear a bunch
of stickers about mascots. Chew tobacco. Be ugly (probably).

An SEC officiating crew - Whenever people ask you questions, huddle together for three to five minutes
and discuss your responses before issuing them, especially when the responses are easy or common
sense. Then spit in a guy’s drink.

Dan Mullen – Do you still have that old "Hunchback of Notre Dame" costume lying around somewhere?
Dye that thing maroon, drag it through a dumpster, and do your best to maintain a constantly goofy
expression on your face.

Markeith Summers – Trap your hands in blocks of concrete. Run around telling your friends to throw
things your way. Act all flabbergasted like when you somehow cannot catch. Then, when it’s clear that
you’ve lost the costume contest, free your hands and catch any- and everything you can.

Kentrell Lockett’s Twitter Feed - Hate on everybody all night while disarming everyone with your
delightful charm.

Tyrone Nix - Walk around guessing your friend’s costumes incorrectly all night, except for very complex
costumes. You’ve definitely got those figured out. Also somehow inexplicably end up with more money
than when you showed up.