Last week, we unveiled a new criteria for the Blogpoll ballot: a combination of five factors (spotless record, Top 50 win, multiple Top 50 win, Top 25 offense, Top 25 defense).  We put teams into strata based on how many of those factors they met.  We considered every undefeated and one-loss team in the country.  We're going to wait until next week before we include two-loss teams, since only a handful of two-loss teams have even one Top 50 win. 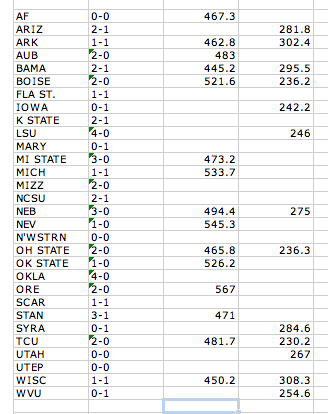 Only four schools meet every category:  Boise State, Nebraska, Ohio State, and TCU.  Alabama, Arkansas, and Wisconsin are the only other teams that are leaders in both total offense and total defense.  Oregon is running away as the leader in total offense, and LSU continues to beat good (maybe not yet great) competition, having more wins against Top 50 opponents than any other team (also leading the country in wins against BCS schools).

Auburn, Alabama, LSU, Michigan State, and Oregon can boast four of my five factors.  Throw in Oklahoma, and the teams that meet four or more factors are my Top 10:

Next, come the teams that meet three of five criteria, plus South Carolina because ... c'mon.

And the teams that meet two of five:

Kansas State and NC State also met two criteria with their wins over UCLA and UCF and Cincinnati and UCF.  These teams were rated in the 40's by Sagarin, so I'm relegating the Wildcats and Wolfpack to a lower level.  Leaving:

As you can see, five teams with 1 or fewer losses are left out:  UTEP, Syracuse, Northwestern, Maryland, and North Carolina State, whose best win over Cincinnati is no big whoop.