Verny and the gang made an awful big deal of some Rebel seniors this season - Shay Hodge and Dexter McCluster come to mind - but there were a number of our seniors who have made a gigantic impact on the program without having been named to just about anybody's All-SEC team in 2009.  Red Cup Rebellion reminds you of them.

Coming from the southwest Mississippi town of McCall Creek (just outside of Meadville in Franklin County, if that means anything to you) as a four-star - no more than two hours from Baton Rouge, if you were driving like Miss Daisy - Marcus Tillman was on the radar of Nick Saban.  He was a Clarion-Ledger Dandy Dozen and a Parade All-American.  I don't really follow recruiting.  Maybe, it's an indication of bad fandom, but it's just not my thing.  Nevertheless, there are always a few signees that create so much buzz that I cannot help but notice.  Marcus Tillman was one. 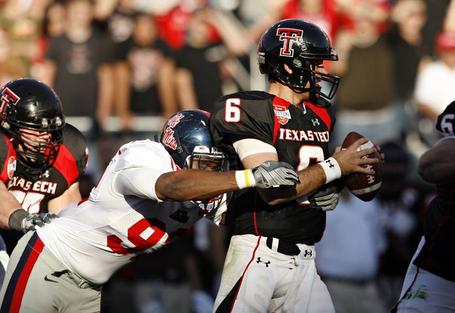 Relive the career of a good Rebel - Marcus Tillman - after the jump.

Marcus Tillman has defied positions on the defensive line.  Even as a freshman, when he started eleven of twelve games, he appeared in five at End and six at Defensive Tackle.  And he did not disappoint.  In his first game as a Rebel, he notched a sack against Memphis.  Numerous services labeled him a Freshman All-American.

At 6'4" 273 lbs., he finds himself in the position of being an interchangeable asset.  He hit his zenith as a sophomore, logging 41 total tackles and an interception, all at defensive end.  He was a big reason the Rebels were ever in the game against LSU in Oxford with three solo tackles, one for a loss.

In 2008 with all kinds of talent starting on the defensive line, Tillman was once again asked to play a chameleon role, spilling time between end and tackle.  However, he started all thirteen games.  Against Florida, Tillman recovered one of a couple Florida turnovers that broke the Gators and enabled the famous victory in the Swamp.

With 36 starts under his belt, the workmanlike defensive lineman was a shoe-in to wear #38 in 2009.  He has started all twelve games this year wearing that patch.  Despite the more celebrated Peria Jerry, Greg Hardy, and Jerrell Powe, Marcus Tillman just got starts and made plays.  He slugged through the bad years and celebrated the good ones.  His physical tools, likely, don't project well for the League, but Marcus Tillman has been a good Rebel.  A Cup full of gratitude goes out to him.