Yeah.... so it's Wednesday.  But that doesn't matter, because we're starting some STATE HATE right now.   "That's a little late for a HATE WEEK post," you might say.

Heh, you would say that, if you were wrong.

Just remember this... It's never too late for STATE HATE.  ED:  Also, don't forget that they're Leghumping Bullfrauds, sorta like the pooch in this video:


Yes, this is ridiculous.

Why do you hate Mississippi State? Try not to use whatever you used during football season but, if you're not feeling original or one who possesses only a few, poignant reasons to hate those clad in Maroon, we won't begrudge you. 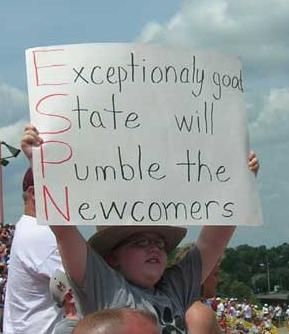 If our universities would lead, our kids could read.