Rebels Storm Back for 24th Straight Over State

Share All sharing options for: Rebels Storm Back for 24th Straight Over State

In a match that started a 5:00 p.m. Mississippi State was still holding on to a once-in-a-decade advantage over the Rebels at about 9:30 when a sweet old man sauntered up to FotC RamRam in the stands at River Hill Club in Jackson and whispered, "F*ck those rednecks."

Read all about the heroic comeback by Marcel Thiemann, the impassioned debut of Harry Fowler, and how Billy Chadwick's team of underclassmen took care of the best Bulldog squad in a decade after the break. 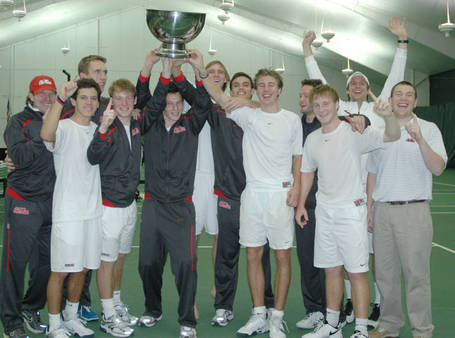 The full recap is over at corporate headquarters.  As are some more pictures.  Kim Ling, your media point person for men's tennis, accurately depicts the electric atmosphere and fills in the numbers.  Over here, we'll try to give you something a little different:  first, the brief recap, then some analysis.

First - the brief recap.  The Rebels lost the double point 2-1, with the Thiemanns winning at #2 doubles and Vorster/Lutjen and Fowler/Forberg Skogeng losing at 1 and 2, respectively.  Only the Thiemanns had played together in an inter-collegiate setting before.

Kalle Norberg, was, in fact, out of the line up on Monday, shuffling around our singles to Tucker Vorster, Marcel Thiemann, Jonas Lutjen, Adrian Forberg Skogeng, and Chris Thiemann.  Vorster and Lutjen lost in straight sets; the Bulldogs needed just one more match to beat the Rebels for the first time since the 1990s.  Forberg Skogeng was on auto-pilot.  Marcel, our #2 singles, was playing George Coupland, State's highest-ranked player according to ITA.  He lost the first set, dropped a break and fought back to 4-4 in the second, fell and injured himself, and fought tooth and nail to win the second set tiebreaker.  But I was worried about how much gas he had left.

Little did I know that tiny German could summon his inner blitzkrieg.  He was slapping shots in rhythm with Wagner and had turned redder than I did last Thursday at Po Monkeys.  KOMM MAL!  KOMM MAL!  I'm talking about a third set wearing his metaphorical pointy helmet.  Don't.  Mess.  With.  This.  Very.  Polite.  Badass.  Marcel wins the third set 6-2, and, even though the Bulldogs are still up 3-1, they are reeling.

Forberg Skogeng is still on auto-pilot.  Fowler is up at #5 and drops the first set, but is playing well.  Chris Thiemann is as the collegiate tennis equivalent of Mariano Rivera at #6.

Fowler is, as FotC 25 Days a Week described him, "a basket-case," drawing on his inner Johnny Mac.  His match was a thrill from beginning to end.  Both Doerr and Fowler could hit some sick shots.  And each was frustrated when their ball placement would stray.  Emotional players with great physical tools are frustrating and exhilarating to watch.  Fowler had more in the tank and won the second set by tiebreaker and the third on a break.  By that time, Forberg Skogeng had won in straight sets - impressively, so, according to 25 Days a Week - and Chris Thiemann had taken the first set, was on serve for the second set, but never seemed in doubt of winning.  And he did - 6-4 to seal a 4-3 win for the Rebels.

Analysis (such as it is):  the freshmen have already gelled with the rest of the team.  Tennis teams are close units.  Ours has shown little if any signs of dissension as long as I have been paying attention.  When little 18-year-old Harry Fowler took that third set, Tucker picked him up and bear-hugged him.  And Harry was, apparently, not the least bit concerned that this sweaty monster of a South African was treating him like blankey.

All three freshman in the line-up showed flashes of brilliance.  If they develop as well as our 2009 freshmen, we are in good hands.

Tucker looked a little dinged up playing at #1, which might explain why State switched their #1 and #2 (in an effort, perhaps, to stack the lineup).  I think he is there for at least the next few weeks, though.  There is no doubt he has the size and power to win matches at #1.  The strength of the Rebels, though, is the depth of talent.  Our five and six players, traditionally, have gaudy records, and it doesn't look like that is going to change.