For at least the next semester, I remain a humble law student and member of the Junior Division of the Sharks Club.  So, occasionally, I run across law-related collegiate athletic stories.  These, rarely, have the distinction of also being related to Ole Miss (y'know, unless Andy Kennedy has been drinking with his old buddies), so the loyal reader can go ahead and skip this little bit of tid if he or she feels so inclined.  For the interested out there, what follows after the jump is a perplexing case of copyright "infringement" involving our conference sister school from the Palmetto State.

It's SEC versus Pac-10, baby, and it's going down in the courtroom!

Last Tuesday, a three-judge panel for the U.S. Court of Appeals for the Federal Circuit decided a copyright disputebetween the University of Southern California and the University of South Carolina.  Like Michigan State and Mississippi State, Tennessee and Texas, Oregon State and Ohio State, and many others, the schools housing the Gamecocks and the Trojans share initials.  We've known this for a long time, and ESPN has, occasionally, had to get creative in abbreviating schools' names on such account.  Such is the peril of a system of tradition where initials are substituted for full names.  But, we all played nicely, understanding that there are hundreds of college athletics programs with robust marketing departments vying for unique combinations under a limited alphabet.

We all played nicely, that is, except for Southern California.

Many are under the misimpression that USC (West) is a public university.  To the contrary.  They are an elitist private school, whose sense of entitlement extends far beyond their football program.  And when you have as much money as they do you are, by god, entitled to your combination of letters, dammit.

The problem, the Trojans say, is that they own the "interlocking SC."  As if this form of arranging text were some 20th century West Coast innovation.  And they feel that the Gamecocks are confusing people with their baseball caps. 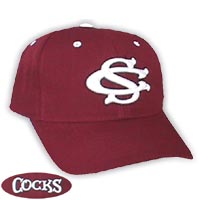 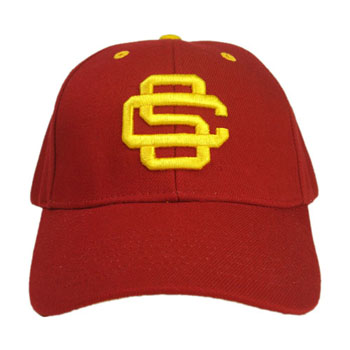 And check this out:

I agree, postal code be damned, that "SC" is not uniquely identifiable with South Carolina.  Maybe I think of Sportscenter when I see it.  But they do have a point that they've been using these damned initials for over 200 years!  The University of South Carolina, as an agent of said state, was going by "SC" back when California was a Mexican desert.  Furthermore, I am straight up colorblind and am not confused at all.

So, in consideration of this bizarre decision by the Circuit Court, I will be offering an Amicus Curiae to the Supreme Court for its review of this decision, complete with a suggested per curiam opinion:

The alphabet belongs to everybody.  Quitcher bitchin'.