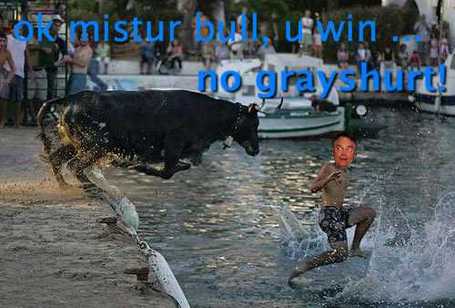 Rongeur de Marais, Louisiana - RECROOTIN' DALE! and defensive coordinator Tyrone Nix are on the trail of a (completely fictitious) linebacker.  Spirit Boarders are hailing him as "the nxt Pee-Willy."  Mostly because he is a two-star.  And he's white.  And Spirit Boarders' reality is less shaken when they imagine that Patrick Willis is white and not, to the contrary, a serious and sobering threat to their traditions.  RECROOTIN' DALE! is attempting to lure [LINEBACKER RECRUIT] to Ole Miss in the hopes that he will contribute on special teams ... and that his brother, one of the Top 100 juniors in the country, will commit next year.

RD!:  I just love being out on the trail to find these outstanding young men to come play for our program, Tyrone.  I think this the most exciting thing we could possibly be doing right now.  Can you feel the intensity Tyrone?  Can you smell it?

CTN bobs and weaves from left to right, reminscent of "Rabbit" in "Eight Mile."

CTN:  I don't know what you're smelling coach / Or why it's awesome / 'Cuz all I'm olphactorin' / Is fried possum!

CTN poses defiantly with his arms crossed, his right shoulder tilted back, and his head cocked to the left.  Like this.

RD!:  I just ... I don't understand what you're saying, ever.  Can't you talk more like Pat Boone or Pat Sajack?

CTN:  You a goofy lookin' man / Soundin' crazy when you talk / You ougtta be a pimp / For the way that you walk.  If you can't understand / what I tell you when I speak / then maybe our relationship is / UP SHIT CREEK!

RD!:  Whatever.  Just keep doing that when we meet [LINEBACKER RECRUIT].

[HIGH SCHOOL COACH]:  Coach Nutt.  Coach Nix.  We're so glad to have you two come give a look at [LINEBACKER RECRUIT].  You wouldn't believe how folks are dismissing him based on his size, but he's strong and works hard.

RD!:  I could tell from the first time saw him on tape that he was special player.  Full of vigor.  Never taking a play off.  Hit the whole and pfewww!  He understands the game.  Has a real heart for it.  Just soooo special.  Love him.  Love him.  Heart.

RD!:  And I hear he's got a big heart.  Wait, could you just understand what Tyrone was saying?

[HSC]:  C'mon coach, let me show you some tape on this young man.  Alright, here is he intercepting a pass against [HATED RIVAL] just before half-time.  We were down by 10 going into the locker room, but [LINEBACKER RECRUIT] has such great presence.  He had 11 solo tackles in the second half alone and we won by 3.  And here he is lighting up the quarterback from [DIVISION RUNNER-UP].  And here he is ...

CTN:  Back that shit up now / Somethin' strange on the screen / Something got blurry / And e'rything turned green.

[HSC] backs up the DVD and plays it back in slow-motion.

[HSC]:  Golly, you're so right, Coach Nix.  I'm sorry I didn't tell you about Orgeron coming in here.  He threatened my family.  But now I know that you and yours will protect me.  And as long as I have anything to say about it, [LINEBACKER RECRUIT] and [HIGHLY TOUTED JUNIOR QUARTERBACK] will be headed to Ole Miss.

RD!:  I still can't figure out what Tyrone just said to you.  But I think he meant it from the heart.

[HSC]: Coach Nix I, um, wasn't aware that you spoke exclusively in rhythm and rhyme.  At least, that is not what I had gathered from our emails.

CTN: (dakes deep breath, pauses, exhales slowly) Honestly [HIGH SCHOOL COACH], I do not typically speak this way.  I especially wouldn't speak this way to my family, coworkers, friends and, frankly, I am embarrassed to speak this way to a stranger or a newly found accomplice, such as yourself.  But, you see, ever since ESPN released that documentary on Miami in the 1980's, "The U", prospects have been looking for a program with some sort of "swagger" and, despite not knowing what that means, Coach Nutt has put me in charge of establishing Ole Miss swagger.  So I watched "The U" a few times, bought "Ready to Die" off of iTunes and "Miami Vice" box sets, and got some shinier wheels put on my pickup truck.  I grew up in Alabama; this all makes me feel a bit out of place and awkward, but it's what the high school kids want these days!  What, with their Tweet-machines and Facebooks and slap bracelets they just wanna live live in the fast lane! (chuckles) Plus, Coach Nutt said he'd give me a promotion and a raise if I started acting like this so, you know, I've gotta do what I can for me and mine.  You understand, I'm sure.

[HSC]: Of course, Coach Nix!  Gotta do what you can to get those kids up to Oxford!