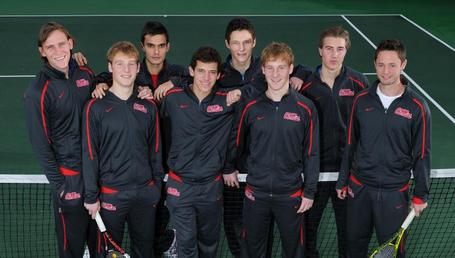 Timberlake is a bitch.  Rebel Tennis is bringing sexy back.  To clarify, from left, they are Tucker Vorster; Marcel Thiemann; Jaime Vazquez Catoira, the new Spaniard; Harry Fowler, the new American; Jonas Lütjen, the new German; Chris Thiemann; Adrian Forberg Skogeng, the new Norwegian; and Kalle Norberg, the senior, who is so tough.

Having previously run down some preseason storylines heading into the SEC Indoor Championship (quick recap of said event:  "meh."), we now head down to Action Jackson for the traditional rivalry match against the Bulldogs this Monday at 5:00 at River Hills Country Club.  Not the Bulldogs against whom the Rebels have traded SEC championships for the last decade.  The in-state, perennially awful Western Division Bulldogs of Mississippi State, likely clack-a-lack-a-lacking their way to the basement of the SEC again.

Click the jump to enjoy a match preview and/or elitist smack talk.

Maintaining a Men's Tennis program has to be the most embarrassing athletic-related move for Mississippi State, excepting, of course, their deal providing cheerleaders as models for Chick-fil-A advertising. 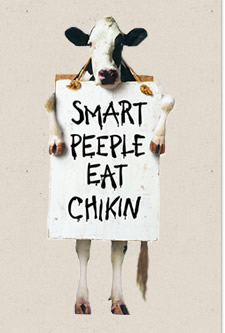 The Rebels have been picked by the SEC coaches to win their eighth straight Western Division championship, while Mississippi State is picked to finish last in the division.  The Rebels' four veterans (Norberg, Vorster, Thiemann, and Thiemann) along with lone fall freshman enrollee Skogeng combined for a 37-11 record in singles.  State, meanwhile, had a full fall roster of nine, so compiled a record of 70-46.

At the SEC Indoor, Ole Miss and State faced each other a handful of times.   Freshman Catoira dropped a 6-1, 6-2 to Artem Illyushin, who is - I'm starting the rumor here - a communist.  The Thiemanns defeated Daniel Sanchez, who advanced to the Round of 16 in singles, and Tanner Stump 8-4 on Day 2.  Meanwhile, Marcel Thiemann led the Rebels, individually, advancing to the Round of 16 in Singles and with his brother, Chris, to the Round of 8 in Doubles.

All that said, determining how the line-ups will come together could be difficult.  But, I'll take a shot:

#6:  Hreehan Hakeem (State) v. I don't have the foggiest idea; they're all freshman; maybe Harry Fowler because he's an American and used to be Devin Britton's roommate (you know, maybe some youngest person to ever win the NCAA Tournament mojo rubbed off on him); USA!  USA!  USA!

And at doubles, State can figure that out for themselves.  I expect to see Vorster/Skogeng, Thiemann/Thiemann, and Freshman/Freshman.  Tucker and Kalle were undefeated as a doubles team in the fall, but rumors persist of Norberg's bad back.  If those rumors are true, Coach Chadwick will want our senior leader ready for singles.

Finally, this match matters only for pride.  Having won 10 straight River Hills Cups and 23 straight overall against Mississippi State, the Rebels fully expect to win this match year-in and year-out.  The River Hills Cup is, like the Governor's Cup in baseball, not counted in conference standings.  River Hills Country Club, though, is a place where a lot of Mississippi's home-grown tennis talent have grown up.  Devin Britton played there.  Coach Chadwick's brother is or was the pro at River Hills.  And our having turned this annual clash into an exhibition in front of the Jackson Country Club crowd is, behind chandeliers in the Grove, the most stereotypically Ole Miss elitist thing we do in athletics.  Country Clubs are our money-having, poor-hating turf!

FotC 25 Days a Week, and I - perhaps more - plan to be in attendance on Monday.  See you there?