Share All sharing options for: Jevan Snead: A Quarterback Killed...

...or one who was never really good to begin with?

With Jevan Snead's recent declaration to opt out of his senior year and try his hand in the NFL, a lot of Rebel fans have begun to wonder as to how much of an impact this will have on our team.  On the one hand, we are losing a quarterback who amassed an 18-8 record as a starter in the SEC which, as far as winning percentages go, is better than Eli Manning's 24-14.  On the other hand, we are losing a guy who undeniably cost us some wins (Vanderbilt in 2008, for example) without putting up the numbers we would expect from a quarterback which we were all convinced was "elite," per college standards.  This last season, Jevan's season went a little like this: 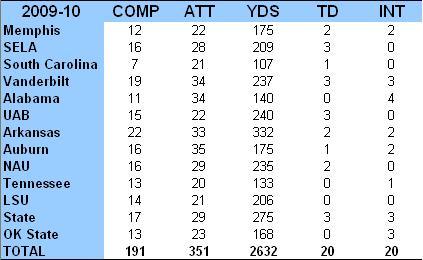 He had no statistically great game against an SEC opponent, save for perhaps the Arkansas game sans touchdowns.  He was atrocious against Alabama, and Oklahoma state.  He was downright marginal everywhere else.

What made us ever think this guy was good? 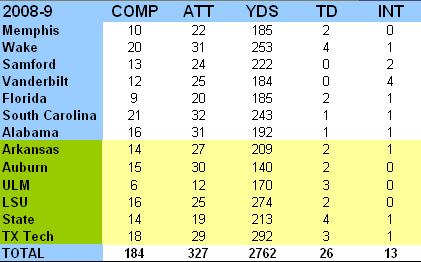 Really though, one could argue that last season was two seasons for Snead.  The "first" season, or the Memphis through Alabama games, saw only one impressive performance out of the Rebel signalcaller in the second week of the season against Wake Forest--a loss, no less.  The "second" season, however, is what thrust Snead into darkhorse Heisman and top-10 draft talk.  From the Arkansas game through the Cotton Bowl (c'mon, it's highlighted, you can see it), Snead threw multiple touchdowns in every game and averaged one half of an interception per contest.

But how different were these seasons-within-a-season?  The answer: very, very, very different.  What I have done with each grouping of games from the 2008-9 season is taken the statistics accrued during those games and calculated what his numbers would have been had he maintained that sort of statistical status quo through a full thirteen games.  First, the good Snead seen against LSU, State, and Texas Tech:

During Snead's six-game streak of deception (too harsh?), he threw sixteen touchdowns, only three interceptions, and connected for nearly 1,300 yards.  Had he played a full thirteen games with such numbers, we would have seen over 2,800 yards, 35 touchdowns (!), and only seven interceptions.  This was elite Snead.  This was "LSU Snead".  This was "not perceived as making a bad decision if he were to opt for the NFL Draft" Snead.  The other Snead--"Vandy Snead"--however:

The raw yardage is similar, albeit with a greater number of passing attempts, but outside of that I doubt anyone is impressed by this.

So, did you notice what I noticed?  No?  Look again.  Read Snead's projected numbers for a whole season had he played it the way he played the beginning of the 2008-09 season.  Take your time.  Still don't see it?  Let me help you out here:

You see it now, don't you?  Jevan Snead's stats for the 2009-10 season are damned near identical to his projected statistics as "Vandy Snead".  A hypothetical season's worth of Vandy Snead would have been 188 of 344 for 2719 yards, 19 touchdowns, and 19 interceptions.  The real-life disappointment machine of Jevan Snead this past season was 191 for 351 for 2632 yards, 20 touchdowns, and 20 interceptions.

Considering this, I posit that Jevan Snead last season was not so much a disappointment as he was the exact same quarterback we saw at the beginning of the 2008-09 season.  He did not develop, but he really did not get worse.  The question now becomes "what exactly allowed Snead to perform at an elite-level for the last half of the 2008-09 season?"  Check it: 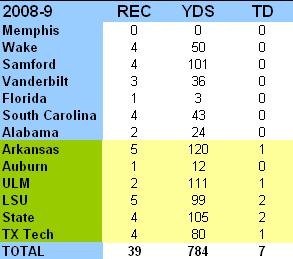 These are Mike Wallace's receiving totals from his senior season.  He, like Snead had two separate seasons-within-a-season during the 2008-09 year.  The first Mike Wallace was an either under- or poorly utilized wideout who only cracked the 100-yard receiving mark once--against Samford.  The second Mike Wallace was a deep threat who, as the fastest wideout in the Southeastern Conference, allowed the Rebels to get behind defenders and stretch the field.  Mike Wallace number one didn't catch a single touchdown and averaged 37 yards per game.  Mike Wallace the second averaged a touchdown and 87 yards per game, and that is with a one catch, 12 yard performance against Auburn thrown in the mix.  If numbers alone don't demonstrate just how different the two Wallaces were, use the chart below.  Cover up the right half with your hand, an index card, whatever.  Look at the left side alone.  Then do the same with the other side: 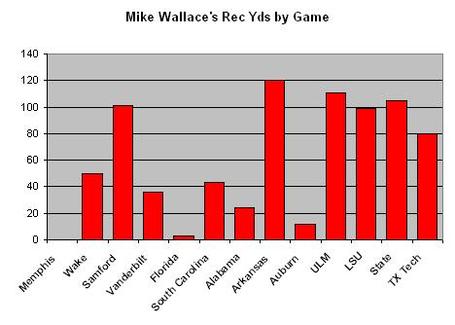 Honestly, Mike Wallace was a non-factor during the earlier half of his senior season.  And it is not as if this was some sort of sustained flash-in-the-pan type of situation.  As a rookie, Mike Wallace led all rookie receivers in yards per catch and plays greater than 40 yards; was second in touchdown grabs; and fourth in receiving yards.  When considering his NFL success along with Jevan Snead's consistently mediocre performances without Wallace (both figuratively and IRL), I think any sort of "chicken or the egg" type of argument at this point is rendered foolish.  Mike Wallace was truly an elite wideout at the collegiate level and, just as with the move of Dexter McCluster from receiver to tailback, it took our team and coaches one half of a season to figure that out

After seeing Tim Tebow without Percy Harvin, T.J. Yates without Hakeem Nicks, and the Mizzou offense without Jeremy Maclin (the only rookie receivers who had more yards than Wallace this NFL season), I find it hard to argue against the notion that an elite wide receiver can, by himself, improve both his quarterback and his offense en masse.  That is, per my interpretation, exactly what Mike Wallace did for our Rebels last year.

After all of the arguing and number crunching, I think we all reach a painfully comforting conclusion: Jevan Snead was never really that good of a quarterback to begin with.  Houston Nutt is, with respects to Jevan Snead's collegiate career and despite everything our detractors want to believe, not a quarterback killer.  Remember, to kill something would suggest that it was actually living at some point.  Jevan simply benefitted from having an incredible offensive line (oh yeah, we miss Michael Oher too...) and an insanely underheralded wide receiver emerge simultaneously.

For all of this, we can certainly say the emotions invoked by and the memories of Jevan Snead's time as a Rebel can best be described as one would his play: a mixed bag.

Best of luck in the NFL Snead.  I'm afraid you'll need it.