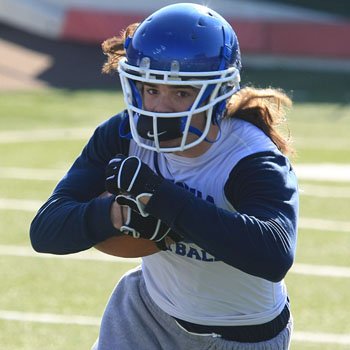 Yes. It's that time of year again. Korvic Neat is the next Dexter McCluster. Gerald Harris is as skilled as Kellen Winslow. Any DE recruit is Greg Hardy but has a motor that doesn't quit. Isn't recruiting fun?

Today, I stumbled upon a particularly illogical post while perusing the Spirit board; a post which forced me to bring this once-prevalent and heralded Cup feature out of hibernation. I'm not going to directly quote the message since it's from a premium board, but suffice it to say that this poster believes that Brishen Matthews, a high school safety who has committed to play defensive back for our Rebels, will be the best linebacker in the 2015 draft.

Just to make sure you got it, the necessary elements of this post involve a safety commit who has not yet graduated from high school, a baselessly hypothesized ability to play linebacker, and the NFL draft five years from now. Five. Years. Five years. Half of a decade.

I find it necessary to fairly point out that this opinion does not come from any person of consequence over there but, as of my typing this, it's not yet refuted by ANYONE.

Yeah. Brilliant observation, [USERNAME REDACTED]. He's listed by a recruiting service at 6'1" 190 pounds. That sounds like first round linebacker quality to me, once he takes his teenage frame and manlifies it up to a beefy 240 of course.  Also, he'll grow two inches.  Book it. Top ten draft pick, then? Definitely. Oh, did I mention that he plays safety and is being recruited as a safety? I did?  Alright well, you're still right because you paid money to waste time at work while chatting with delusional crusties who are out of touch enough to be in orbit.

Look, Brishen Matthews may be good. Maybe he'll be a great player at Ole Miss and, honestly, I would love for him to be. As a Rebel fan, I want every one of our recruits to at least be worthy of the Southeastern Conference, and I want every one of them to be great at the sport they are committed to playing. But at this time, it's just recruiting hype and GWH (Great White Hope). Yes, I'm glad we're signing the guy, but who wouldn't be? His video looks good, and he's one of the top players in the state of Arkansas.

But how does one project a move to linebacker that will make him the best linebacker in the draft five years from now? What is the argument here? Have you spoken with or even seen Brishen Matthews in person? Do you own a crystal ball? Do you smoke peyote? It's just an incredibly ridiculous assertion and I hope I need to offer no further explanation as to how such nonsensical conjecture should very much be the subject of ridicule.

Need I remind anyone of the prediction (and subsequent MBI post) that Patrick Trahan would become the next Patrick Willis? How did that turn out? Well, this season, Trahan was fourth on the team this season in tackles. He also was not a consensus all-American. He also didn't even play the same position as PWillie.

Only one thing makes the referenced thread even better. And by better I mean disappointing. And by disappointing I mean "TSWRA". On the board, there's a poster who references some of last year's recruits who we weren't highly recruited yet contributed to the team this last season--namely LB Joel Kight and WR/KR Jesse Grandy. He guesses that Matthews, along with OT Jared Duke will be two players who will do the same at Ole Miss for this upcoming season. How did he pick those two players, out of the several mildly-recruited guys in the class, to turn out to be good? I'll leave you to ponder that one on your own.