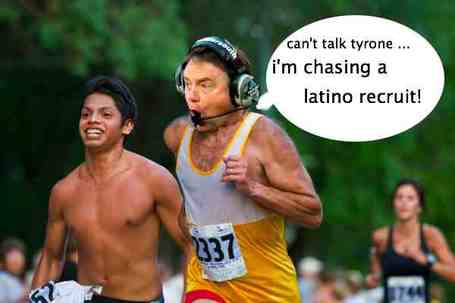 Oxford, Miss. - RECROOTIN' DALE! and assistant Kent Austin are hunched over a lap top.  RD! paces in a semicircle around Austin and the laptop.  He points at a lamp, nods his head violently, and tells the lamp that it is "a winner."  Austin watches video of [RECRUIT REDACTED PER NCAA REGULATIONS].  The young man in the video is athletic, tall, and black.  The video shows him running in-game, complete with helmet, pads, and dual-colored uniform.

RD!:  That boy's a football player!

AUSTIN:  I'm not sure that's the most helpful observation, Coach, but, just for the record, I agree.  I'm more interested in how you think he handles the ball.  There's no way he has the arm strength to play quarterback for us, but look at those hands.

AUSTIN:  Here's the problem.  Our scouting report says he really wants to play quarterback at the next level, but I don't see him jumping anyone on our depth chart at quarterback.  How do we get him to commit knowing that he won't play quarterback.  Whatever we do, we can't just shoot it straight with him.

AUSTIN:  Houston, I just said that if we shoot straight with him, he won't commit.

AUSTIN:  Respectfully, coach.  This is bizarre.  Really awkward and bizarre.  Just very uncomfortably confusing.  And I lived in Canada for a long time.  Don't you remember "The Kids in the Hall?"  I know all about weird.

AUSTIN exchanges salutations followed by "uh-huh" and "okay" and "that sounds great."

RD!:  Tell me about that magic, Kenny-Kenny Quarterback.

RD!:  Boss Austin, lemme tell you, folks have told me there's method to my madness.  And I don't understand what they mean by that because by "folk" I mean Klingons and Joan of Arc and I don't speak French.  And I don't allow people to use it in my house around my children, either.  Some people may think that's backward or kooky, but I've always been about "people before players," y'know.  "People before players."  And Klingons aren't people.  So, I'm not going to let them or Joan of Arc or anybody tell me how to recruit these young men.  Well, I might let Jimmy [Sexton] tell me, but that's his divine right, y'know?  Cat dog lamp tradition avocado football giggity Go Rebs, okay?  Got that?

AUSTIN returns to his computer screen and begins writing code for break-through software that will design new and innovative plays with 87% success rates.  RD! is texting "hey this iz houston wanna chat?" to random numbers.

RD!:  Hey, Kentin Tarkentino, you heard anything about this Kiffin to USC rumor?  {under his breath}  I might need to call Jimmy.