The Cup Countdown - Number One

Share All sharing options for: The Cup Countdown - Number One

When I say, "one of the most historic moments in the history of Ole Miss," your mind - enamored of the recent, like so many minds are today - is likely to recall one of two memories.  In a strange coincidence, they happened on the same weekend.  In an even stranger coincidence, they both featured a tired old underdog against the flashy new superpower.  In the strangest coincidence of all, they both were headlined by a pseudo-messiah.

I decided to see the one that was most likely to impact my life in a meaningful, practical way. 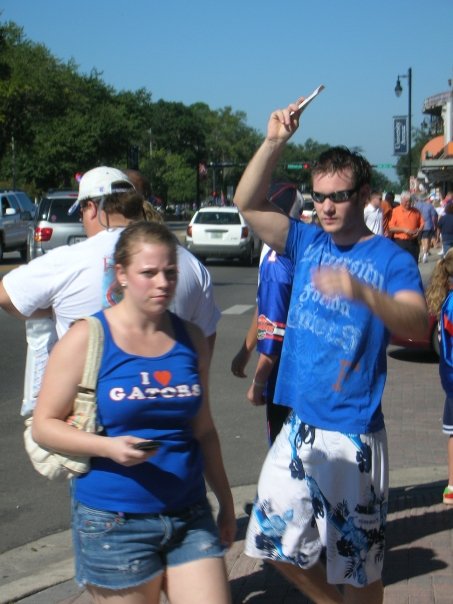 Naturally, I went to the Florida game.

Anyone who belittles the heat of the Swamp in September is either lying or he is Twice The Man Than Ever Existed Before Him (it's capitalized because that was Jaylon Snead's given name).  (ED:  Your quote of the day comes from FotC, Hoyt Brumley:  "Someone in the airport has a mustache that is making Jaylon Snead's look small.  This guy's mom got knocked up by Yosimite Sam.")

Whiskey let you know what happened to him after the Vanderbilt game.  As a prescription for future home let-downs, I submit to you that little has the healing qualities of a good cry and some Coop Deville.  So, I picked myself up by my bootstraps, complained to my roommates that Whiskey was bailing on me, and called a friend doing Master's work at Georgia Tech, who was plenty pleased to take Whiskey's spot. 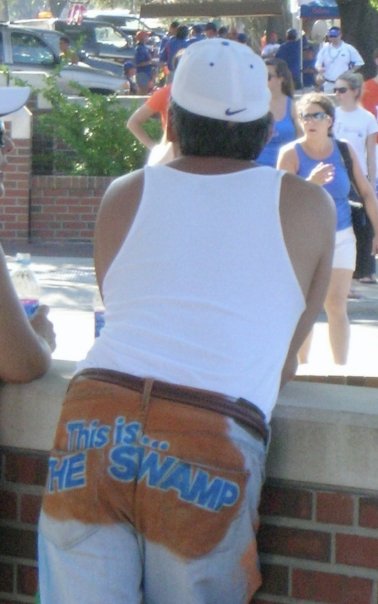 Of course, I heeded the ominous warnings found on this young man's butt.

The butt-warning was ever-present in my mind through that first half, the details of which need not be rehashed.  Because I am an Ole Miss fan in the unbelieving mold (I remember some young man who wrote for The Daily Mississippian who called himself the Oxford Optimist; people like that are tools), I was equally as excited about the atmosphere as I was about our impending loss.

The loss never came.  I left the Swamp in jubilation, and it all happened because ...

Don't like the quality?  Well, then I guess you should've seen it in person.

It requires no analysis.  And everybody has their own story about what it felt like when they heard about it.  No one needs to hear mine.  But why is it number one?  First, let's recap:

2. MANY HAPPY RETURNS:  An example of not turning the other public relations cheek."

So, many of the top plays this season involve the defensive line.  Whether they were getting safeties, interceptions, or sweet salty tears out of opposing offensive linemen, the stars of Ole Miss 2008 - with respect to everyone else who brought Ole Miss out of the cellar - were the down linemen who put record-setting quarterbacks on the ground and became the spirit and the passion of this team.

They became legends in this game, and, specifically on this play.  Sports Illustrated may have shown Greg Hardy flying through the air in pursuit of Tim Tebow, none of it would have mattered but for that play.  And it's ironic.  Perhaps the play that epitomized the prior administration - yea, became a well-known phrase to describe it - was an attempted 4th down by the Rebels.  Ten months later, the play that put the Rebels on the map, made stars of our defensive line, and seems to have set all things right was the 4th down attempt by the greatest player in the history of the game doing what he did best.  And they beat him.

You just had to be there.