No introduction needed.  Cool picture time before the jump: 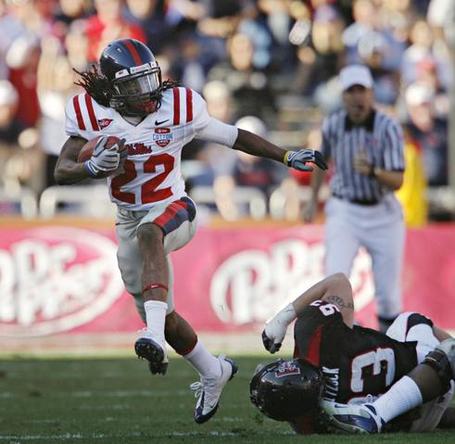 Memphis - 99% chance of winning -  We won't lose to Memphis.  I repeat, we won't lose to Memphis.  People who are worrying about this game are either football ignorant or naturally inclined towards worry.  I don't give two shits whether or not Memphis (with DeAngelo Williams) beat us when we had Lord Eli of Manning.  Our defense was epically horrible that season, something which certainly will not be the case this year.

SELA - 100% - I'm not wasting our time explaining this.  Clayton Moore should see significant playing time here.  Hell, Nutt may line him up in the WildRebel for either shits-n-giggles or to demonstrate to Scout.com posters just how stupid their message board suggestions would look if played out in real life.

South Carolina - 55% - Ole Miss is the better team here.  Nobody would deny that.  If last night's game against NCSt is any indicator, their offense is limp while their defense is good.  We do match up well.  It's just that there is legitimate cause to be concerned about playing in Columbia on a Thursday night.  Very, very rarely do away teams win those ESPN Thursday night matchups, even the good ones.  Remember, Southern Cal's lone loss last year came during a Thursday night ESPN game which saw the Trojans traveling to Corvalis to face the Oregon State Beavers.

Vanderbilt - 65% - Why can't we, like everybody else in the conference, just blow Vanderbilt's dick out of the back of their pants?  We never, ever beat them by the margins which we should.  If I were just going by talent on the roster regardless of team names, this would be a 95% win percentage game.  However, we are Ole Miss, and Vandy gives us fits every season.  I do think our players are going to be fired up and ready to get revenge on the Dores from last season's miserably embarrassing loss, but this one still makes me nervous.

Alabama - 49% - If the Tide roll in to Oxford undefeated, only to face the thus-far undefeated Ole Miss Rebels, this game will be the single biggest game Oxford has ever seen.  I don't mean that just in terms of folks in the stands, either.  I mean the atmosphere surrounding it, the media coverage, the tensions, et cetera.  The 49% is subject to change after Saturday night's game, but I doubt it will.  Alabama is very, very talented and very, very well coached.  We will need to bring our A++ game to beat them.

Arkansas - 60% - By this point in the season, we will have a much better gauge on just how much Arkansas will have improved upon last year.  If Petrino and Mallett go together as well as many folks say they will, this game will become a shootout.

Auburn - 65% - Auburn is not very good right now.  Playing them well in Auburn (or period) has never been our strong suit as the only victories I can recall snatching from Auburn involve things like overtime, dropped passes in the endzone, etc.  However, I'll reiterate the fact that Auburn just is not very good right now.  To Auburn fans who are likely very angrily reading this: please tell me who is going to score points for you on offense?  Auburn's defense will certainly be tough, but they will be hard pressed the find the endzone against anybody, let alone our Rebel D.  They simply don't have playmakers.

Tennessee - 70% - Unless Bryce Brown is a freshman phenom at halfback, Tennessee will struggle on offense.  Epically.  Johnathan Crompton is still not perf...  You know what.  I'll just say "Johnathan Crompton" and move to my next point.  Their receivers are already depleted by injuries and their most heralded and experienced offensive lineman, Mississippi native and Volunteer center Josh McNeil, has recently had trouble with wrist and back injuries.  Also, you best believe Dexter McCluster, Kentrell Lockett, and others have a point to prove knowing that Ed Orgeron will be on the opposing sideline.  McCluster himself even said that he wants to "show Coach O just how good his recruiting classes really were," or something badass like that.  Their defense will give us fits on a few drives, but I do not expect the Volunteers to move the ball very well against our Rebels.

LSU - 51% - While we at the Cup have gone on record as to why we do not feel LSU will be as good as advertised, I still think they'll improve significantly.  I just cannot see them regressing (nobody should), nor do I see them stagnating upon last season.  LSU will be better and they will be ready to bring it.  Once again, this is another one of those "wait and see" type things but I don't picture this one being another lopsided Rebel victory a la last season's 31-13 curb stomping.

So, upon further review, I can break my prognostications into three distinct camps: guaranteed wins, potential victory trap game types, and tossups.  Memphis, SELA, UAB, and State are guarantees.  South Carolina, Vanderbilt, Arkansas, Auburn, and Tennessee are the traps.  Alabama and LSU are the tossups.  Of the traps, we lose one; of the tossups, we lose one.  That's just how I feel.  I can't quantify it nor can I verbalize it outside of my bizarre and undeniable gut feeling that I'm right on this.  We are way better than 7 or 8 wins, but we just won't get 11 or 12.  11 or 12 wins is a damn near impossible mark to achieve in the first place, let alone in the SEC.

So which games do we lose exactly?  Well, by utilizing my foolproof method, I have determined our losses to come against (I'm sorry) Arkansas and Alabama.  Why?  Well, aside from the fact that I literally drew names out of a hat, I'll say we lose to Arkansas because we'll have some game we fuck up with turnovers and their offense should actually be pretty good; and Alabama because their defense is solid and they'll be able to get yards when they need them.

Considering this, Alabama may go 12-0 again.  I do not see LSU beating them in Bryant-Denney and, unless Tyrod Tayler has significantly improved, Virgina Tech will have their hands full for their season opener.  Other than that, their schedule is as easy as ours.  Second in the West could happen again.  Sorry, Rebs.

So therefore I predict an 11-2 season with a final ranking somewhere between 10-15.  Snead goes pro and we immediately enter rebuilding mode.  But, you know what, we'll have a damn fun time getting there.