Share All sharing options for: The Cup Coundtown - Number Two

In the ten days leading up to the beginning of the season, the cup is recapping its top ten moments and memories from last season.  Today, The Ghost of Jay Cutler brings the faithful readers moment number two.

When we cupdaters were coming up with this, the ten greatest moments of last season, there was really only one moment I just had to do.  I could have easily regurgitated some memories about everything we've discussed thus far before stitching whatever thoughts I had together with a few "ands" and "howevers," but none of those writings would have meant nearly as much to me as what I am about to write.

I know it's crazy, and I don't really care.  When discussing with Ivory Tower as to why I wanted this particular moment so much, I literally described it as "one of the happiest moments of my life."  Cup fans, behold, the 2nd greatest moment of the 2008-2009 season...

And no, "one of the happiest moments of my life" is hardly an overstatement.  (Gladly) Being a single guy in my early-20's, I've never experienced my own wedding or sired any little Ghosts--that I know of.  I'm a damned genius, so both graduation days and a majority of my academic accolades were expected of me, thus removing any real excitement they could have brought.  I have never won a lottery or, for that matter, a damned door prize.  So what have I in my canon of extreme happiness?  Well, aside from the extremely personal or downright inappropriate (this is a PG-13 rated blog... sorta), I have my Ole Miss fandom.

I live it.  I breathe it.  It decorates my walls and permeates my thoughts.  It is the subject of a disturbingly large percentage of my conversations.  My life as an Ole Miss fan has grown and evolved into this: a blog which is somehow read by more than just a few dozen people who feel sorry for me.  I do this damned near every day and love it.  This is my wife.  This is my child.  This is my achievement.

Being as how I have invested myself so fully and distantly over-the-top, I oftentimes let this element of my life get a hold of me.  Just as I've explained that some of my most thrilling moments are related to my Ole Miss fandom, some of my life's most frustrating moments are undoubtedly tied to Rebel football.

The 2007 Egg Bowl is very much one of these moments.  As the game ended on Mississippi State's 17 unanswered points which included a Derek Peagues touchdown punt return, what seemed like a sure Rebel win rapidly became a humiliating loss.  I was miserable and angry.  Losing to State is certainly one of the most emotionally taxing thing that can happen to this bloggeur.  That's because, unlike a lot of Ole Miss fans, State is number one on my shit list.  Not LSU, not Bama, not whoever else.  State.  I'm the Wolverine who hates the Spartans; the Longhorn who hates the Aggies; the Volunteer who hates the Commodores.  I do not at all know why, but the Egg Bowl just means more to me.

So we lose the Egg Bowl.  I'm mad, bitter, a bit relieved that O is gone, but still put off by the whole thing.  Then, a few weeks later, this happenes: 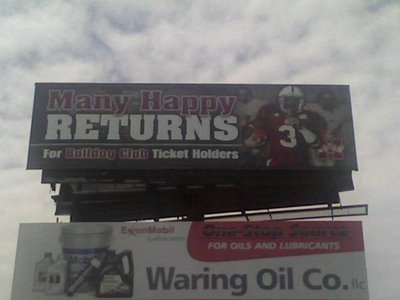 Upon seeing one (yes, there were several), I let out a big "fuck you, you cop punching son of a bitch" for Derek "NFL?" Peagues.  State was very effectively salting our wounds.

Not only was I then disappointed in the Egg Bowl loss, but I was also disappointed in Ole Miss' real lack of grit or gumption.  "We, as a bunch of pseudo-elitist jackasses, should be the ones doing this," I thought.

Fast forward to the 2008 Egg Bowl.  The final seconds are ticking off of the clock and there it was, thrilled. As I stood close to the tunnel under which our overwhelmingly victorious Rebels would carry the recently re-earned Golden Egg Trophy, I victoriously thrust my arms  skyward.  Picture a referee's signal for a touchdown but with joyously clenched fists.  It was me celebrating victory by vicariously carrying the Golden Egg myself; displaying it for all of those remaining in Vaught-Hemingway Stadium to see.  I was, at that moment, fully satiated as a fan.

At least, so I thought.

The moment which took the Egg Bowl victory from "thrilling" to "exhilarating" was, for this die-hard Rebel fan, the moment when the following was broadcast on the PoweTron: 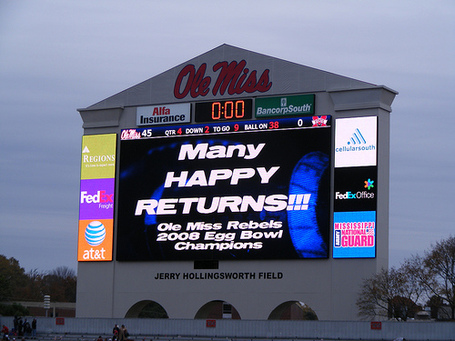 Finally, for the first time I can remember, Ole Miss took Mississippi State to the damned woodshed right before rubbing their noses in it.  We were deliberately--and fairly cleverly--added insult to injury.  We were ushering the walrus and all of his "character" bullshit out of the door while making sure that it did, in fact, smack his fat ass on the way out.  The Golden Egg was back where it was meant to be, and sure as hell weren't going to let ourselves forget that so quickly.

And fuck you State.  I hope all of the terrible things in life happen to you and nobody else.

Tomorrow, our countdown comes to a close with the single greatest moment of the 2008-9 football season.  This one shouldn't be too hard to figure out.  Two more days people.  Two.  Oh how palpable Ole Miss football has become over the last few weeks.