In an attempt to make some sense of what happened, wrestle some subdued memories from the shackles of drunken misery, and look towards the future, I re-watched the crucial moments of last week's South Carolina game.  Hopefully my observations will give us an idea as to what we should look for when our Rebels face the Vanderbilt Commodores this Saturday evening.

Also, in a completely unrelated note, I'm a masochist.

The Defense is the truth.  Our defensive line is (surprise!) the heart and soul of this team.  They made Stephen Garcia's night very, very difficult which, in my opinion, says alot about Garcia for not looking at all bad against such a rush.  Jerrell Powe is solid, as is Ted Laurent and Lawonn Scott.  gr3gxxz is still enigmatic 'n' shit while our other ends are the hallmarks of consistency.  Seriously, I'm gushing here for a reason.  The linebackers are getting better, but we should still hope DT Shackleford is quickly recovering from his injury.  They don't capitalize on opportunities as well as their fellow defenders.  The secondary is night and day from last year.  Night, and, day.  Cassius Vaughn acutally looks competent at corner and Marshay can keep up with anyone step for step.  Johnny Brown is a fierce tackler and Kendrick Lewis is a prototypical free safety.  The Rebel defense will keep us competitive in every game we play.

Look, Jevan, I know you're strong-armed and have faith in your receivers, but some of the throws you were attempting had no business being thrown.  Also, cut the happy feet in the pocket.  If need be, pop a valium or something before you go out there.  I've got a guy, his name is Rodrigo he can meet you at th...

You know what, I'll get that info to you through some other medium.  But, in all seriousness, if Jevan Snead doesn't start to play calmer, more focused ball, we could be in for a miserable ride through the SEC.  Of course, the coaches are going to need to help this as well.

Call some dink-and-dunk stuff on occasion.  Far too many plays called required a route to develop 10 to 15 yards beyond the line of scrimmage.  Where's the swing?  The slant?  The in?  The hook?  The bubble-screen?  Mix it up and let Jevan build some confidence.  Also, please get Dexter McCluster the ball some more.  This requires absolutely no explanation on my behalf.  The guy makes plays.

Wide receivers not named Shay Hodge or Pat Patterson: catch footballs.  You wanna know how the Hal Mumme/Mike Leach school of coaching gets their receivers to catch with consistency?  They shoot tennis balls at them in practice.  Extreme?  Sure; but it obviously works.  While I'm not suggesting we have our coaches do that per se, I do think something new needs to be done.  Markeith Summers and Lionel Breaux are too valuable and lacking to be so poor at such a fundamental aspect of the game.

The running game was fine, but poorly utilized.  Bolden continues to run with authority and Dex knows which holes to hit and when to hit them.  If the coaches would run the ball like they did in the 4th quarter we should be able to control the clock more effectively and wouldn't have to rely on Jevan to make something happen.  The offensive line, for all the grief we've given them, can run block quite well.  On running plays, the did a decent job of controlling the line of scrimmage and opened up a few significant holes.

Pass blocking, on the other hand...

Yes, it's a broken record, but I don't care; Bradley Sowell isn't good at pass blocking.  Really, our whole line is a piece of work, but the left tackle is the single most significant pass blocker.  Hands down.  Bradley Sowell cannot do something well at a position where one unequivocally must perform well for his team to win.

But, what is it exactly that Sowell is lacking?  Let me put it this way: Michael Oher's size, strength, knowledge of the game, and athleticism weren't what made him an All-American.

Ok, so all of that had a good bit to do with it, but that's not where I'm going here.

What made Michael Oher the subject of the book on left tackles was his attitude.  Michael Oher had a nasty streak.  Sure, he was big and strong and all that, but he was also a huge asshole in the trenches.  He jawed at his defenders, called guys out, smacked facemasks and held when he knew the refs weren't looking, kept pursuing even after the whistle was blown, and generally engaged in on-field thuggery.  That is what a good left tackle is made of.  I don't want a left tackle who plays nice or plays by the rules.  I want a cold, merciless leviathan who wears pads to protect you from him, and not vice versa.  I want a bouncer to the backfield, not a turnstile.  I want a bodyguard for the quarterback, not an escort.

Do you remember last year's LSU game?  Of course you do.  What Rebel fan couldn't?  Do you remember when Rahim Alem, LSU's all-SEC defensive end jumped at Jevan towards the end of the game?  Here's an excerpt from our old digs which, upon naming Rahim Alem to the SEC Power Poll's all-SEC team, recounts the aforementioned event:

...I will most vividly remember Rahim Alem for a very brief and inconsequential moment of moronic douchedom. Do you remember how, just before Snead took the final knee in Death Valley, he thought it cute to jump offsides and rough-up Mike Oher a little bit? Yeah, that was lame.

And stupid; who in the hell lines up against Michael Oher and thinks, "you know, I'd like to do my best to anger this hairless Yeti standing accross from me" and then actually follows through with it? It's a good thing for Mr. Alem that the game was winding down because that could have ended very, very poorly. 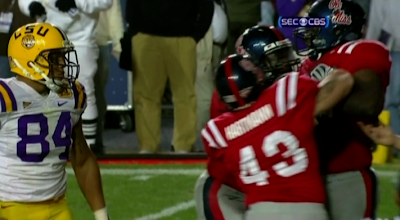 Alright, so I'm biased. What else do you expect from an Ole Miss blog?

It took two fullbacks to (barely) keep Michael Oher from starting a fight in garbage time.  The game was more than over, but Oher didn't care.  Alem jumped after Snead and Oher's mind rang out a resounding inner "fuck that."

Yeah, I thought so.

Bradley Sowell, despite what the "experts" promised us, is soft.  He's huge, likely strong, and certianly knowledgeable of the game; but he plays every down like he is just trying to make it to the next play.  He plays "ummmph ok I shoved a guy" football as opposed to "I'm gonna rip this fucker up" football.  He plays like someone from the suburbs of Memphis, not someone from the projects of Memphis.

So, to Bradley Sowell, please, become an asshole.  No, hitting on other dude's girlfriends and picking fights with freshmen at The Library doesn't count.  Take a lesson from Kyle Turley.  If I don't see you play just a hair dirty against Vanderbilt's defensive line, very few of us fans will have faith in you.  Play, after play, after play you let something happen that could have been avoided had you played just a bit meaner, a bit dirtier.  Get out there and hurt somebody, please.

So, what have we learned?  Yep, nothing we didn't know already.  If we can fix these mistakes, we will blow the doors off of the Vanderbilt.  I really do feel that we could become a national-media boner again if we were to properly utilize our talent and if Bradley Sowell our offensive line were to tougher ball.  Our talent is there on offense and our defense is one of the best we've seen in Oxford in a very long time.  We've gotta get this done.

And, as a matter of housecleaning, I'm calling it now: moratorium on the Bradley Sowell bashing.  At least until after the Vanderbilt game.