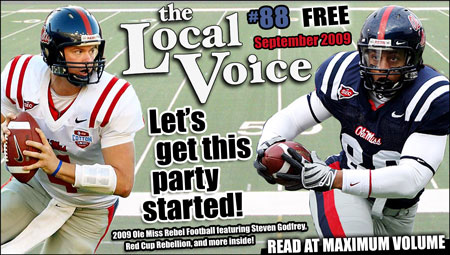 Superficially, it would seem dumb for an SEC football team-as a member of the greatest conference in college football-to have any sort of a rivalry with a member of the Conference USA, or "America's runt conference for excommunicated coaches and nomadic athletes."  But, although many folks on either side of the argument are not willing to admit it, that is exactly what we have on our hands with the Memphis Tigers.

While not a fact which readily avails itself, this game once mattered.  In the 1960's and 70's, this game was heated and significant.  Night games, hard sellouts at the Liberty Bowl, and legitimate fighting amongst the fans marked this annual heated series.  While the tensions which once existed between the two schools have significantly cooled off, they have certainly not died down.

This is especially true on their side.

Ole Miss fans, on the other hand, do not necessarily hate Memphis in the same respects that we may hate LSU or Mississippi State.  Really, we Rebels are just annoyed.  I can remember my last trip to the Liberty Bowl where, upon being chided by a young man with "CROCKIES (sic) SUCK" painted on his chest, I couldn't help but shudder in disappointment.

"Sir, it's spelled ‘C-R-O-A-K-I-E-S' and, no, they really don't suck that much.  Also, you misspelled something which you painted on your own, boyish chest and you're cheering for the University of Memphis football team so, really, I'm gonna win this one every time."

He hated me, my team, and whatever eyewear accessories he mistakenly thought I owned whereas I simply found him stupid and dull.

Furthermore, while most Ole Miss fans rightfully count the Memphis game as a damn-near guaranteed win every year, Memphis fans do too. It's astonishing to talk to Memphis fans who, each season, think the game could go either way. Remember, Ed Orgeron didn't lose to Memphis with Seth Adams under center but, if you were to ask several Memphis fans, Houston Nutt is going to lose on Sunday with Jevan Snead at quarterback.  Yes, in the topsy-turvy world of Memphis Tiger football, these thoughts exist, further demonstrating the bizarre nature of this rivalry and Memphians in general.

Yet, despite the bitter feelings and somewhat historical nature of the matchup, this Sunday will mark the last time Ole Miss will face Memphis for the foreseeable future.

Initially it may seem like a win-win situation for we Rebels to continue playing Memphis.  I mean, if we're gaining some exposure in the Memphis area and playing an opponent which even Ed Orgeron couldn't lose to, what is there to lose?

Oh yes, there is the possibility of losing potential revenue and television exposure via continuing to play Memphis every single season opener.  When diversifying your games against opponents in real, big-boy conferences you easily increase the money and exposure factor.

And sure, many would argue that the Ole Miss Rebels will lose control of Memphis-area recruiting if we were to stop facing the Tigers.  But a few moments of logical thought reveals that it's not just our annual season-opening waste of time which has kept Memphis-area athletes like Michael Oher, Terrico White, and Greg Hardy flowing into Oxford, but rather the allure and stardom of the Southeastern Conference

But, most importantly, the thing we lose by continuing to face the Memphis Tigers, especially if we are going to actually play them in Memphis, is dignity.  It is absurd for an SEC football team-especially one which, as a program, is legitimately on the rise-to concern itself enough with a mid-major school to the point of playing them as the away team every other year.  Thanks to Houston Nutt and our university's athletics administration, we will see some much higher profile out of conference opponents in the future which include Georgia Tech, Clemson, and Texas.  Those are teams we can legitimately anticipate being the away team for because, not only are they great teams in excellent locations, but they also fill their stadiums to an extent where we, as visitors, won't outnumber the home fans.  Furthermore, as opposing teams, the aforementioned will send plenty of people to the Grove who won't exude a general air of suckitude while wearing "bust a Nutt" t-shirts with basketball shorts.  They'll be, you know, normal people and likely college graduates.

Also, they don't film half of the episodes of "The First 48" in Clemson, South Carolina or Austin, Texas

Let's finally put this age old "rivalry" out to pasture with a dominating win.  Hotty Toddy and Go Rebels Go!