Who Is This Guy: DajLeon Farr

Share All sharing options for: Who Is This Guy: DajLeon Farr

Give Tommy West one thing - he's resilient.  Most folks would have given up on earning some measure of respectability for Memphis as a football program, oh, probably a few minutes after the introductory press conference.  West, meanwhile, has take the perennial doormat to heights where only men like David Cutcliffe dare.  And, he did it, largely, with unheralded recruits who turned into stars, like DeAngelo Williams (ed: Williams was far from "unheralded"), and even future [insert embarrasing sub-NFL career here]s like Danny Wimprine.

West has recently adopted a shiny, new strategy:  poach off the University of Miami. 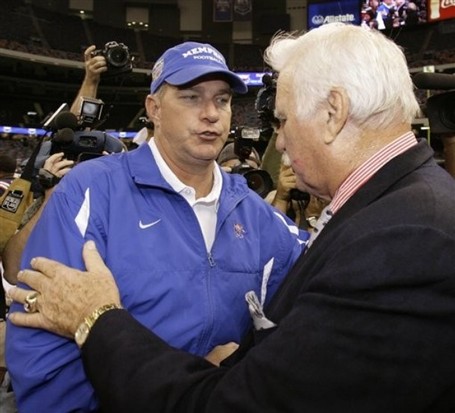 Whether a homecoming for Cannon Smith - I just knew Miami was the place where he was really going to mature and find his bearings - or a new home for Jermaine McKenzie, Memphis is the new Miami, only with fewer national championships and less "designer" in their drugs.

But former Hurri-cons will feel right at home in Shelby County.  And it all started with DajLeon Farr.

As noted in Tuesday Question, Memphis' plan through the air has been sort of like trying to get from Guadalajara to Nueva York in a single-engine citabria - short bursts through the air with lots of stops.  Little slants and curls.  The perfect set-up for a big, receiving tight end to get some playing time.

Farr was a bit of a disappointment at The U, though with only 10 career receptions there in three years on the team.  And, while DajLeon (pronounced DAY-le-on, obviously) left Miami voluntarily, the scuttlebutt is that he did so after developing a bit of a reputation as a trouble maker, and remember, this is in comparison with players at Miami.

Farr, though, is just an indicator of the transfer talent coming into Memphis.  Folks who follow Mississippi high school football will remember Derrick Odom, a stand-out at Callaway before signing his letter of intent to be another Orgeron-almost that signed with LSU.  Odom and Mississippi State transfer Jamon Hughes have completed their NCAA-mandated timeout and are, from all I can find on the internets, ready to contribute.  Deron Furr, meanwhile, originally signed with Auburn, but will be suiting up for the Tigers in 2009 at free safety.

When it comes to Memphis - and their welcoming arms to those players suspended from the BCS for various bad behaviors - "Who is this guy" is actually a pretty reasonable question.