The Blog Poll is here.  The Cup is, once again, not the recipient of any "awards."  I think next weeks ballot is going to be extra wacky just so we draw the ire of the blogosphere.  It is interesting to note that the Rebels were one of the most disagreed upon teams this week.  We were ranked as high as #3 on some ballots and not even present on others.  Brian Cook suggests that bloggers "hate" Ole Miss in that the BlogPoll ranking for our Rebels is four notches lower than the AP's ranking.   I disagree.  I don't think we're so much "hated" as opposed to "hard to get a grasp on."  We're three weeks into the season and we haven't played anyone worth a damn.  If folks don't want to rank us as a result then I completely understand.

The Power Poll is here.  Pretty fair analysis all around.  Graphic is right below.  Seriously, you should be able to see it. 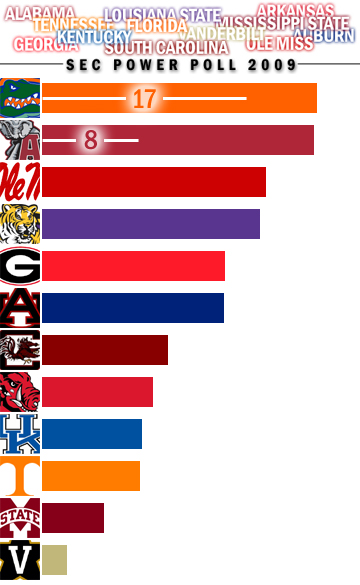